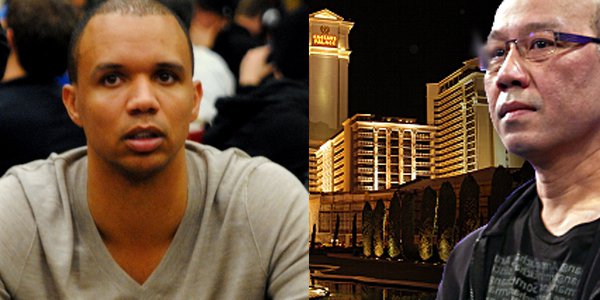 Phil Ivy has a calm demeanor on and off the felt, but he’s currently been in the news for controversial stories, including edge sorting and posting bail for two Macau businessmen booked on illegal betting charges.

Phil Ivey has been an American poker legend for more than a decade, but in talking to him, you wouldn’t notice it. While fully aware of his status as arguably the world’s best poker player he maintains a calm demeanor, preferring to beat opponents at the poker table and quietly get on his way.

But over the past few weeks gambling news concerning Ivey have been more than the typical reports of bad beats, bracelets and high-stakes table victories. For the first time in his career he’s developing a sort of notoriety; he was accused of cheating by the Borgata casino in Atlantic City after using an “edge sorting” technique to win $10 million at the baccarat tables.

While that situation sorts itself out, last week Ivey contributed $1 million toward posting bail for Malaysian poker pro and alleged gangster Paul Phuawei-Seng, who was arrested in Las Vegas on illegal sports betting charges. Just days later he posted another $500,000 to bail out Wai Kin Yong, the son of Macau junketeer and alleged gangster Richard Yong.

Of course, involvement in these dubious affairs in no way means that Ivey is guilty of any wrongdoing, but it certainly makes his character worth investigating. Before getting into the recent incidents surrounding him, let’s take a look at his public persona.

Ivey’s poker career started with a bang. An unknown, unpublicized upstart, he won three World Series of Poker bracelets in 2002, earning the nickname “The Phenom.” In 2008 he won $1,598,100 at the World Poker Tour’s Los Angeles event.

• He recently put up $1.5 million to post bail for Paul Phua Wei-sen and Wai Kin Yong, both held on illegal betting charges

• Ivey is one of the world’s biggest celebrity poker players

While playing in major televised tournaments with the WSOP and WPT he has also been known (as are all poker pros) to play in high-stakes private cash games, sometimes with buy-ins in the millions. It is believed that he met both Phua and Richard Yong while playing in such tournaments in Macau.

The edge sorting allegations at the Borgata last month were not the first time such charges have been leveled against him. A similar incident occurred in 2012 at Crockford’s casino in London. He won $11 million playing punto banco (a variant on baccarat), but the casino refused to pay out anything beyond his $1 million stake. Why? They accused him of edge sorting.

In case you’re wondering, edge sorting refers to a method by which players spot certain advantageous cards then track them while they are shuffled through multiple hands. Unlike card counting, edge sorting is considered to be a form of cheating by most people.

He denied the claims: “any allegations of wrongdoing by Crockfords are denied by me in the very strongest of terms.” However, Crockford’s never paid out the money. So when a repeat of that incident occurred at the Borgata, few with personal knowledge about Ivey were surprised.

Connections with Phua and Richard Yong

The FBI has asserted that Phua is a member of the 14K Triads, one of the oldest and most powerful organized crime groups in Hong Kong. The same claim has not been leveled against Yong, but running a Macau junket is not usually done without breaking some laws.

Ivey has admitted to placing bail for Phua and Wai Kin Yong but has not made any other public statements concerning them. It should be noted that other poker pros Andrew Robl and Tom Dwan also contributed to getting the two men released, showing that they have some powerful friends in American poker rooms.

It’s a known fact that Ivey first encountered Paul Wuawei-Seng and Richard Yong while playing in high-stakes poker games. But how do we get from there to Ivey putting up $1.5 million to bail two alleged Hong Kong gangsters out of jail in the US on federal illegal betting charges?

It seems that “The Phenom” is a man of mystery and likes to keep it that way. Perhaps he simply values his friendship with the men in question so much that he would spring for their release; perhaps he was offered a hefty under-the-table reward. Maybe he just wanted to stick it to the authorities in anti-gambling America.

Whatever the reason, Ivey seems to have interest in sharing it with us.

Ivey has been a consummate professional both on and off the felt. The edge sorting incidents shouldn’t stain his character, but it shouldn’t be surprising that the incident has given him negative publicity. Being labeled an edge sorter won’t score you the best treatment at casinos.

As for his connections to Phua and Wong, there is nothing wrong with Ivey posting bail, and there is certainly no reason to believe that he is connected to any of their dubious activities such as the illegal World Cup betting ring in Vegas.

But how the public perceives him is important to his success not as a poker player, but as a businessman. He should be more careful to avoid high-profile scandals and dealing with alleged Hong Kong triad members.