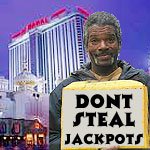 Atlantic City Casinos have been steadily losing customers to neighboring states, unlicensed internet casinos and online poker sites in United States. Nobody really wants to go to Atlantic City for any other reason besides gambling. The place is dangerous.

You won’t find a single tourist brochure that recommends going for a romantic stroll on the boardwalk after dark, unless the brochure is from a survival school. It’s unsafe to even leave the casino.

Instead of taking the proactive approach and cleaning up the city by throwing out the aggressive drug addicted homeless, the hustlers, vandals, pickpockets, drug dealers, junkies, thieves, scammers, pimps, robbers, con artists, drug addicted prostitutes and the mentally insane who roam the streets, the casinos decided to make a quick buck the easy way.

In early 2011, New Jersey State Legislature passed a reforms package which included a provision that’s extremely unfair to players and borders on outright theft. The provision allows any casino to remove a progressive jackpot game and keep the accrued prize money for itself. So if a casino has 10 or more progressive slot and bad beat poker rooms jackpots at $1 million each, that’s a nice chunk of change the casino now legally gets to keep to offset lower revenues.

The New Jersey Division of Gaming Enforcement is in charge of Atlantic City Casinos. Its director, Mr. Josh Lichtblau explained that this new regulation is actually very beneficial to all players. It is?

On the surface the logic used to defend the new law makes perfect sense – by removing unpopular progressive slots and replacing them with newer and more popular slots the customer benefits by having a wider selection of popular games to play and have an overall better gaming experience.

That may be true, but why not carry over the progressive jackpot from the discontinued machine and add it to the new progressive slot, or spread the prize pool evenly over all the progressive games instead of pocketing it? That’s a good question which unfortunately has no answer.

The CFO of Trump Resorts, Mr. David Hughes was insulted by the very idea that casinos would keep the money instead of voluntarily redistributing it. He patiently explained the fundamentals of Marketing 101 – that if casinos keep the accrued progressive prize pool, such action will anger the casino’s customers who will no longer visit the casino, and customers are very important – the casino’s ‘bread and butter’.

That may also be true, but as Mr. Ryan Alders of Casino Advisor points out – ‘Why push for a law that you claim you will never use?’ That’s another good question which unfortunately also has no answer.