Ukrainian politicians are accusing each other of corruption in the dawn of Euro 2012 Football Championships. 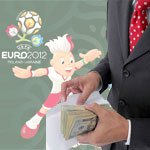 Political opponents in Ukraine keep on accusing each other days before the football championships begin.

Julia Tymoshenko, a former Ukrainian prime minister, ended up in prison after her political opponent, Victor Yanukovych, became a president. Charged with irregularities, when it came to gas contracts with Russia, Tymoshenko has been sentenced to seven years.

Tymoshenko lately made headlines after going on a hunger strike when she ended up in a prison hospital. This has led many foreign politicians and celebrities to boycott Euro 2012 games in Ukraine. While asking fans to come over, Tymoshenko asked foreign dignitaries to avoid the matches.

Now, Tymoshenko is accusing the president of corruption when it comes to Euro 2012 contracts. As she claims, Yanukovych’ son, in signs of nepotism, has benefited personally thanks to his father’s holding of the highest office.

Moreover, Tymoshenko is pointing out that some of Euro 2012 construction contracts clearly exhibit the signs of corruption and, as an example, gives the cost of installing ten benches in Kharkiv underground station as $90,000. Yanukovych is paying back and now Tymoshenko is facing another trial for financial transactions she made in 1990s.

What’s unfortunate is that instead of focusing on the matches, and promoting their country, Ukrainian politicians are running a muppet show. In the dawn of the biggest sporting event the country is facing in its history, it would be better to advise the football punters about the gambling laws, especially related to bets on sports in Ukraine.

These, unlike the Polish gambling laws, are still a mess.

Meanwhile, on Ukrainian streets the people are more concerned about the chances of Ukrainian national team during Euro 2012. Ukraine is playing in a tough group against France, England, and Sweden.

British online sportsbook Ladbrokes gives Ukraine few chances of winning with the French and English, but has more likely winning odds when it comes to the match against Sweden.