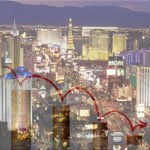 Nevada revenue took a hit in October, as Las Vegas felt the downturn after two months of positive results. Across the state, revenue fell by 2.5% to $954.3 million, but it was in Las Vegas where it was most pronounced, as revenues fell 5% in the former capital of worldwide gambling. The decrease comes a month after new American gambling laws allowed Nevada to launch online gambling in the state.

Interestingly enough, Las Vegas cannot blame any American internet casinos, as there aren’t any in the state, thanks partially to Sheldon Adelson’s opposition to online gambling. The Las Vegas Sands owner ensured that there were no online slots in Nevada, only poker and sports betting. Yet he may even be proved right, as it’s slots that have been hit the hardest on the strip.

While these one month slumps are usually blamed on luck at the baccarat tables, this one is almost completely down to the slot machines, with a 6.3% drop in revenue statewide rising to 10.9% on the strip. Baccarat, by comparison, rose by nearly 17% month on month, accounting for more than a quarter of the house wins on the strip.

With mobile casinos on the way, perhaps this will make other casino owners stand up and take note. While most casinos have embraced online competition, Las Vegas Sands remains standing tall against it, and Adelson will surely use his huge leverage to fight against any change in Nevada policy.

On those online sites, while the Nevada Gaming Control Board will not separate online revenue until there are more than 2 sites live, Union Gaming Group figures suggest a $600,000 win for the two poker sites. Ultimate Poker and WSOP will be hoping that number will rise substantially in the coming months, while the potential for a deal with Texas could boost revenue further.