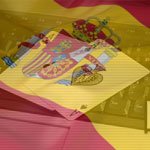 With the final 2012 numbers now in for Spain, the performance of the local gambling industry appears to have followed a flat trajectory or even a slight dip last year according to official reports.

The reasons behind the dip are varied, though the effect of the new Spanish gambling laws, in effect since June last year, is noticeable.

That legislation brought some order to the online sector, among others. Taxes and regulations, however, resulted in online gambling contributing a mere 1.4% of the industry’s revenue. This happened during a year when its share of the turnover grew from 6% to 11%.

Online growth is driven to a large extent by punters who are happy to be able to finally bet on sports in Spain, considering that offline sports betting is still limited to sports lotteries. As a result, wagering on sporting events made up over a third of the online revenue.

Spanish poker rooms accounted for just under a third, while casino games contributed a mere tenth of the revenue. The latter fact is hardly surprising if we consider that these casinos are not yet allowed to offer slots to their visitors.

The various lotteries and sports lotteries run by the state led the way in the offline segment, accounting for 36% of the total gambling turnover and 44% of the revenue. As it is to be expected, slots are also immensely popular in Spain, finishing a very close second behind lotteries (33% turnover, 32% revenue).

Brick-and-mortar casinos, on the other hand, have been suffering (6% turnover, 4% revenue).