Brazilian Gamblers Charged with Animal Abuse in the States

According to Brazilian gambling laws, only a few forms of gambling are considered legal. By “a few,” I mean three: horse racing, 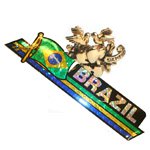 According to Brazilian gambling laws, only a few forms of gambling are considered legal. By “a few,” I mean three: horse racing, the national lottery and bingo. This has been the case since 1946 when the contemporary president, Dutra, declared all other forms illegal.

Though this may be the case, a loophole was found in the law and gambling machines are permitted and available at many different locations throughout the nation. A local’s only other real option to gamble comes in the form of internet gambling in Brazil.

Though Brazil’s laws may seem rather stringent towards gambling in brick and mortar facilities, they have relatively little to say about internet gambling. None of the current laws even reference the subject. At the same time, the government does not grant licenses to online gambling companies.

This is not a problem in the least for a simple reason. Though the government doesn’t license any online gambling facilities, there are a plethora of online casinos in Brazil that nationals are welcome to play on.

Four Brazilian individuals recently got into some serious trouble in the United States in regards to gambling. They were running an illegal gambling ring with a form of gambling that isn’t legal in either Brazil or the States. As a matter of fact, this form of gambling shouldn’t be legal or permitted in any nation.

The four men were running a betting operation based on fighting finches. Two of the male birds would be put into a partitioned cage. A female bird would be shown to them, and at this point the playing gets dirty. In an effort to win the heart of the female, the two males burst into song and, once the partition is lifted, engage in a battle to the death.

Forty cages containing 20 South American Saffron finches were found at the Brazilians’ residence in Ashland, Massachusetts. This form of gambling promotes abuse to animals and is not legitimate in any way. If Brazilians feel the need to gamble, they should visit an online casino.