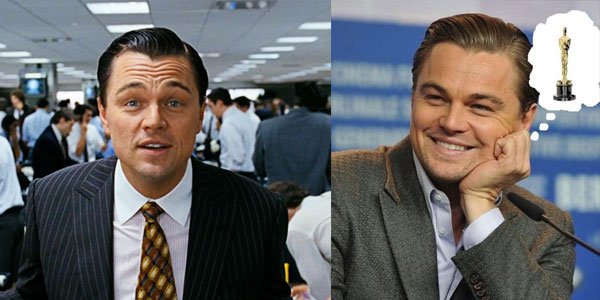 Leonardo DiCaprio is once again looking to end Oscar-drought and finally pick up a statuette this year.

The bookies with entertainment betting odds and especially the ones providing lines on the 86th Academy Awards say that Matthew McConaughey is the favorite to take the Best Actor Oscar home this year. But can this be the year Leonardo DiCaprio breaks the spell and wins the elusive statuette?

It’s been twenty years since the young DiCaprio has been nominated for an Oscar for his outstanding performance in What’s Eating Gilbert Grape. Yes it was a Supporting Actor nomination, but still he deserved one that year. And then came the years of scrutiny making Leo one of the most notorious Oscar-free actors.

This time around he’s trailing behind Matthew McConaughey in the race for Best Actor Oscar. And yes, McConaughey outdid himself in the Dallas Buyers Club, but it’s only his first nomination, and DiCaprio actually stands a chance, regardless of what the bookies and polls say.

The way bookmakers create their odds should be ignored now. For most parts the guys behind Academy Awards betting odds haven’t even seen the movies themselves. The odds are mostly based on the opinion of critics, various reviews and general public attitude towards these movies and actors.

McConaughey performed brilliantly in all of his latest pictures, Mud, Dallas Buyers Club, and even alongside DiCaprio in The Wolf of Wall Street. Not to mention a breathtaking performance in the on-going TV series True Detective alongside Woody Harrelson. All this have forced bookmakers to favor Matthew with short odds. However, the Ron Woodruff role, the one he’s nominated for, is widely considered to be a short cut to winning an Oscar for anyone who plays him.

Other nominees in the race for Best Actor

What about the other guys on the Best Actor bandwagon? There’s Chiwetel Ejiofor, brilliant star of probably the best movie of the year – 12 Years a Slave. But we all agree that this movie will get the Best Picture award, thus reducing Ejiofor’s chances at Best Actor.

But then again, experience tells us that when a certain picture is picking up speed at the Oscars it has a chance of going through a bunch of Oscar categories sweeping one statuette after another. And should Ejiofor win the Best Actor on Sunday no one will really complain, well at least the ones that actually seen the movie. And should the Academy approach 12 Years a Slave voting in the same way they did The Artist and The King’s Speech, then neither DiCaprio nor McConaughey stand a chance.

Google and the Oscars

Taking a little detour from the critics and public opinion, let’s investigate a unique approach to determining the winners. The guys Google went through a trouble of assessing the Academy Awards nominees and applied their usual search trends techniques to predict the winners.

Leo got the Oscar for The Wolf of Wall Street according to Google. Well, analyzing the searches may not be the most accurate way to predict Oscar betting odds and winners. But still these results reveal that Martin Scorsese’s picture and Jordan Belfort by Leonardo DiCaprio are the most talked about Oscar nominations.

DiCaprio’s previous runs with the Academy

Everyone knows the Leonardo DiCaprio had a pretty painful experience when it came to the Oscars. Moreover, fellow actors and public is actually making fun of him for not winning any yet. But to be honest, every time he ran for an Academy Award, there was someone better among the nominees, so there really mustn’t be any hard feelings.

Remember 1994 and his first nomination for What’s Eating Gilbert Grape? Well, Leo’s performance was excellent, but it didn’t quite come close to Tommy Lee Jones’ in The Fugitive and Ralph Fiennes’ in Schindler’s List.

His later attempt at an Oscar with Blood Diamond was a strong challenge, and this was the time when Leonardo is considered to have become a real actor capable of greatness and of course awards. But there was also The Last King of Scotland that year, and it’s not even a question if Forest Whitaker did a better job with that role than Leo with his.

And when The Aviator came providing Leonardo DiCaprio with another nomination, it was overtaken by Jamie Foxx’s Ray Charles. Even though the critics and the public agreed that Leo put in a very decent performance. Close, but no cigar.

Why this year is different for DiCaprio at the Oscars?

Without a doubt the 86th Academy Awards are different for DiCaprio. This is the first time in many years that the Best Actor category is so strong. McConaughey, DiCaprio, Ejiofor, and even Christian Bale and Bruce Dern have shown great performances, some might even argue that these were the roles of their careers.

However, DiCaprio has really outdone himself with the Jordan Belfort role. And should The Wolf of Wall Street remain without Oscars this year it will surely go down in history as one of the greatest films never appreciated by the Academy.

What others are saying about DiCaprio

Marlow Stern from The Daily Beast website had the following to share: “Now that DiCaprio is on the brink of the big 4-0, it’s time to do the right thing and honor one of the finest actors of our generation with an Oscar while he’s still in his prime instead of some paunchy supporting role a decade later.”

Can Leonardo DiCaprio win an Oscar this year?

• He’s second behind McConaughey looking at the bookies odds

Tom O’Neil from a renowned Hollywood forecast site said: “Leo is arguably the biggest movie star in the world giving the biggest performance of his career in the most talked-about film of the year. That looks like Oscar to me.”

But there are also cautious opinions. Head of the Broadcast Film Critics Association, Joey Berlin, shared: “I believe Leo has been honored to receive Oscar nominations and I don’t believe he has been ‘snubbed’ by the Academy. Winning an Oscar is incredibly rare and difficult and many screen legends never won one. Leo is a great star and he may win this year, but just to be nominated again is very special.”