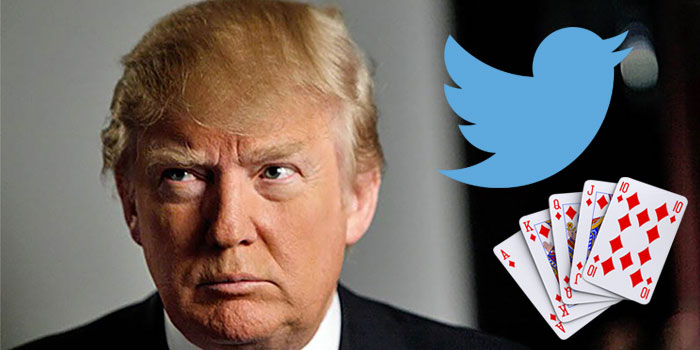 No poker faces on twitter! Poker stars are getting riled up, for and against, the potential Republican nominee for President. We check out top poker players tweets about Trump!

Despite being born in Canada, Negreanu is regarded as the best of famous Romanian poker players; what’s more, he started out in US poker rooms and isn’t shy about the American election!

In last week’s debate, Trump claimed (in response to insinuations by Rubio) that he had “no problem” with his size… down there. On twitter Daniel Negreanu fights for truth by asking Trump to “release a dick pic to prove it’s of average size or more!” He even offered a $100, 000 donation to a charity of Trump’s choice! As poker fans know, when Daniel Negreanu fights, he usually wins. But on this occasion the king of Romanian famous poker players may be on to a lost cause. Let’s hope so anyway, does anybody want to see that?!

You might ask how this fits on a list of famous poker players tweets about Trump, but the backlash to his comment certainly earns him a place. Hellmuth’s responses to angry followers (both supporting and against Trump) will be making gambling news for weeks to come!

Safe to say we know what popular female poker player Liv Boeree thinks about Trump. She recently tweeted: “I’ve never believed in the devil, but #DonaldTrump might actually be it.” Among famous poker players tweets about the Donald, hers are some of the strongest in opposition. She has posted several videos criticizing his business dealings, and also encouraged her 113K followers to watch John Oliver’s Trump takedown on his show Last Week Tonight.

Another loud Trump critic on twitter is American poker star Oliver Busquet. He has posted and retweeted links on the Republican nomination race, including an MSNBC article on Trump’s connection with white supremacists. Busquet is a philosophy graduate, and he’s testing his arguing skills debating with other famous poker players on twitter.

Liv Boeree, Erik Seidel, and Daniel Negreanu have all tweeted about Trump

Of poker players tweets about Trump that have riled Busquet, none have more so than Matt Glantz’s. He posted a short explanation of why he was voting for Trump, reckoning that the Republican front-runner “gives a real chance to change”. He also thinks “the job he has done with his children is impressive.” Glantz thinks Trump genuinely wants to make the country great, Busquet disagrees.

Always the professional, 8-time WSOP bracelet winner Erik Seidel has been concentrating on winning big. He’s been tweeting about the odds of the nominations; he thinks gambling on the nomination race is better than a bet on sports. He also hopes to end up at poker table with Trump supporters. He thinks he’d win big, but admits he’d have to wear headphones!

Finally, we have a player who is tired of poker players tweets on Trump. He wants a “widget to filter political commentary.” He clearly doesn’t share our interest in poker players political tweets, tweeting, “this is unbearable”!