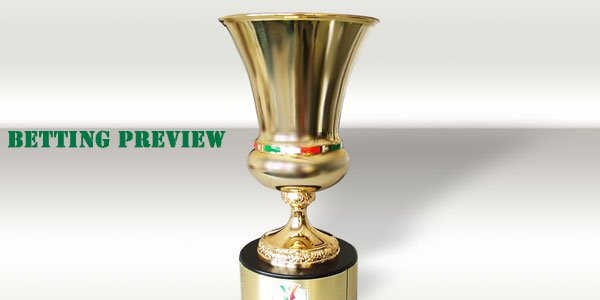 Prepare yourself for some great football action as the 1/8 finals of the Coppa Italia get underway.

Many football fans like to watch the English FA Cup and Spanish Copa del Rey believing that the level of football that they witness is the best in Europe. Although that may be the case nowadays, there is some pretty thrilling action taking place in the Italian Cup as well where some teams are known to deliver exceptional football.

Italian gambling news reports that AC Milan will play against Sassuolo at home tonight where should be able to overcome their opponents with relative ease. On Wednesday evening Parma and Cagliari will go head to head while Lazio will go up against Torino away. And then on Thursday, Verona will face a difficult test against Juventus away, which should make way for some spectacular football.

AC Milan vs Sassuolo and Parma vs Cagliari

A few years ago AC Milan was a true force in the Italian league, however nowadays they find themselves being almost a mid-table team being in 8th place with only 26 points. Their upcoming opponents in the Cup are Sassuolo at home and in Serie A they are not that far behind as they sit in 11th place with 24 points from 18 games.

The visiting side have an uncertain away record that consist of 3 wins, 3 draws and 3 losses, which is why Bet365 has decide to rank them as underdogs 5.50 (9/2) against the Rossoneri. A draw 4.00 (3/1) between the two does not seem to be on the cards considering that Milan are the hosts which gives them an upper leg heading into the match. Overall, this game should be an easy win for the hosts 1.61 (8/13) despite not being phenomenal in the league.

Parma is currently in the relegation zone and sees no end to its woes. They are second last with only 9 points from 18 games so far. At home they have notched 2 wins, 1 draw and 6 losses, however for the Cup game against Cagliari at home on Wednesday evening, online sportsbooks in Italy have identified them as the favorites 2.30 (13/10).

Cagliari do not boast a commendable record either as they are also facing some difficult times at the moment finding themselves in 18th position, one place above Parma. While playing on the road they managed to record 2 wins, 3 draws and 4 losses, which is why Bet365 has assigned odds for a draw at 3.25 (9/4). A win for the travelling side has been set at also 3.25 (9/4), highlighting their current uncertain position.

Torino vs Lazio and Juventus vs Verona

Lazio on the other hand are giving their all to break in between the first two spots which is dominated by rival AS Roma and leaders Juventus. Their away record stands at 3 wins, 4 draws and 3 losses, which is why Bet365 has earmarked as the preferred team to win 2.50 (6/4), while Torino hold underdog odds of 3.00 (2/1).

Torino and Lazio will lock horns on Wednesday evening as well, and although the former is not viewed as the favorite side to win this encounter they will still be looking to cause an upset and seal a victory. At home, Torino has made 3 wins, 5 draws and 2 losses which has seen them clinch the 14th spot on the table.

The current leaders of Serie A have been dominating Italian football for the past 3 years and they don’t seem to stop now. They have won 3 league titles in a row and are looking to add a fourth at the end of this season. In Coppa Italia they will next play against Verona who have been branded as complete outsiders by many football critics.

Under Italian gambling laws, Bet365 is able to provide punters with great betting options. For this game the sportsbook has given Juventus odds of 1.20 (1/5), while Verona has been dealt highly unfavorable odds 17.00 (16/1). Considering that Verona lie in 13th place with only 21 points, their biggest aim can only be a draw 6.50 (11/2).