Euro 2016 First Round: What Happened So Far and What to Expect?

News >Euro 2016 First Round: What Happened So Far and What to Expect? 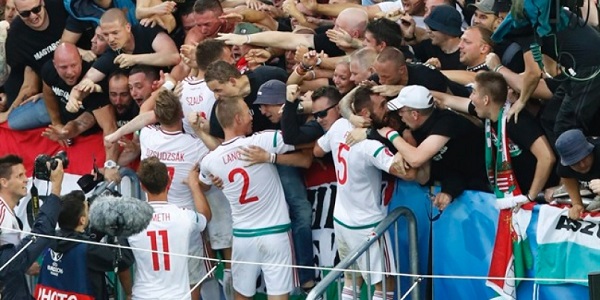 Now that the Euro 2016 first round is over, we have a bit more clear views about what to expect of each team.

The Euro 2016 first round came with some minor surprises for most online betting sites in France, but none of the favourites missed their chances to show their class. Let’s see the Euro 2016 results so far and take a look at who can qualify to the top 16.

Group A: France and Switzerland are favourites

As it’s always the hosting nation’s duty to kick off the tournament, France played the first game at Euro 2016 against Romania. The French team was not so convincing on its first game at the home competition, but they did manage to defeat their rival thanks to Payet’s genius. Switzerland also defeated their respective rival, Albania, and hence these two are group leaders after the first round.

In the second gameday, France are hosting Albania and Switzerland will play against Romania. The 2 teams with 3 points are clear favourites for both games and both will most probably reach qualification for the top 16 at the end of their second matches. Any other result would be a great surprise. However, the group winner will only be known after France played against Switzerland…

Group B could be one of the most interesting groups in the first stage of Euro 2016. Not only because a tiny team like Wales performs well with a top quality player like Gareth Bale, who scored the first free kick goal at Euro 2016 at a 2-1 victory over Slovakia, but the infamous England v Russia rivalry also takes place in this group.

England played against the Russian side in the Euro 2106 first round and were playing far better compared to their respective rival. They even took the lead and the game seemed to be in their hands. However, Russia equalized in the end, stealing 2 points from England. What happened at Euro 2016 afterwards, is not such a beautiful story: Russian hooligans jumped over to English football fans and beat them up out of frustration.

In the second round, England will play against UK-mate Wales which will be quite a derby. England will need to win the game if they dream of first-placed qualification, but it won’t be such an easy task. On the other hand, Russia will play against Slovakia. Should the Russians take up another fight at the tournament, and the team will be sent home. These “football fans” from Russia are actually the perfect example of what football is NOT about!

Group C: What are the chanced of Ukraine and Northern Ireland to qualify?

The first matchday of Euro 2016 happened exactly the way as it was expected at Group C: Germany easily won against Ukraine, claiming the first triumph at Euro 2016 by more than one goals, while Poland also managed to claim the 3 points against Northern Ireland, although they did suffer a lot against the UK country: only one goal by Arkadiusz Milik decided the game.

In the Euro 2016 second round, the great derbies are coming up: Ukraine will play against Northern Ireland and both teams need a win to be able to fight for Euro qualification. Ukraine are favourites according to online sportsbooks in France, but who knows, Northern Ireland can still hope to upset the odds! On the other hand, the Germany v Poland rivalry will basically decide who will qualify as group winner and will go on as runner up.

Group D: Croatia could be the underdogs to win Euro 2016?

The biggest name in Group D is obviously title-holder Spain, who played against Czech Republic in the Euro 2016 first round. Spain did create tons of chances to score, but still they managed to put the ball into the net on only one occasion. That was enough to claim the 3 points though.

However, Croatia also showed incredible talent in the game against Turkey: Modric scored an amazing goal which was the only goal of the game, but Darijo Srna also took a direct free kick in which he defeated the Turkish goalie. However, his ball hit the post so the veteran full-back couldn’t put his name on the scorer’s list.

In Euro 2016 second round, the first round’s losers will play against the first round’s winner, so Croatia against Czech Republic, and Spain against Turkey. Spain are likely to defeat their Eastern European rivals, but the most interesting question is if Croatia will be able to continue to perform at the same level as they did against Turkey. They have the top quality players, they might even end up winning the tournament!

Group E: Belgium failed to prove its class against Italy

Italy and Belgium are the greatest names in Group E and a lot is expected of Belgium, the national team which is full of talented top class players like Hazard, De Bruyne etc… However, they were powerless over Italy who defeated the Belgian side easily by 2-0 in the Euro 2016 first round. On the other match of the group, Sweden tied Ireland thanks to an own goal from Ibrahimovic’s architecture.

In Euro 2016 second round, Italy are meeting Sweden where another victory would basically give them the title of group winners, and they have pretty good chances of getting there. Obviously, Belgium are meeting Ireland then and will need to show why they are the second best national team according to FIFA Rankings. They need the points more than ever after losing the first game.

No online sportsbook would have ever predicted such a thing, but it’s one of the Euro 2016 facts After Euro 2106 first round, Hungary are group leaders and are one of the only 3 teams who managed to win by more than 1 goals. The underdogs were expected to finish last in Group F but their terrific performance helped them to a 2-0 victory over Austria, and now they instantly became favourites for top 16 qualification!

On the other hand, Portugal played against Iceland where Cristiano Ronaldo didn’t do anything useful for his team. No wonder though, he received some serious threats from dangerous Icelandic men. Who would dare to obey The Mountain’s words? Portugal took the lead against Iceland but the Nordic country managed to equalize.

In the Euro 2016 second round, odds upset master Hungary will face Iceland in hopes of causing another shocking surprise by stealing a few points from them. Portugal will, however, need to defeat Austria, but that will be a tight battle: both teams will need to win if they want to qualify for the next round. We’ll see what happens next, but Group F became pretty exciting thanks to Portugal’s draw and Hungary’s win.