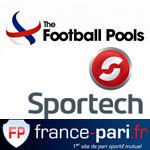 The owners of the Football Pools – a sports betting institution in the UK – is taking its most successful product across the channel in a new move to boost revenues. Sportech have partnered with France Pari to offer the pools to French customers as they look to grow the 89 year old game.

Of course, the Football Pools of today is in stark contrast to the original, offered to fans outside Manchester United’s Old Trafford stadium back in 1923. Nowadays, the company has moved away from its door to door service and offers internet betting in the UK. This new development is due to change all that, however.

The company did not expect the service to still be running nowadays. After the formation of the National Lottery in the ‘90’s, the number of players slumped, but despite revenue falling from GBP 23.7 to GBP 21.7 in the 6 months until June 30th, this move into France is one way the company is looking to keep the pools profitable.

Sportech Chief Executive Ian Penrose is hopeful about the deal, saying about the French: “They love their gaming, they are very big into their horse-racing,” he said. “There’s clearly a very good reaction to both the French leagues and the English Premier League.”

The Football Pools was bought in 2007 by Sportech, a company who also offer online casinos in the UK and abroad. This deal will link them with France Pari, who will initially offer Premier League betting to their customers in France.

With changing UK gambling laws, companies are looking for new ways to bring in extra revenue. Indeed, with high taxation in the pipeline for overseas operators as well as UK based ones, this is the perfect time to expand for many. Both companies will launch new offers to their players from September 17th.