Is This a Roulette or Not?

News >Is This a Roulette or Not?

Gambling laws in Florida get very complicated. Sometimes you can play roulette and sometimes you break the law doing it. 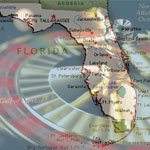 While American gambling laws get complicated, the specific state laws can go to the extreme. Take Florida. Gambling within the state borders is legal on some devices, while a felony on others.

In the Sunshine State, playing at American poker rooms is legal if done at horse or dog racing tracks. These tracks can also offer slot machines, but only in certain counties such as Miami-Dade.

Speaking of blackjack games, it is exclusively offered by the Seminole Native American tribe. As far as it goes, roulette and craps are not allowed anywhere within in the state. But, there are ways with which the land-based casinos in Florida circumvent the laws.

One way is with a roulette-like device, which acts as roulette, but according to the legal definitions, it is not. The machine generates random numbers and is not spun by the dealer but by a computer, which regulates the force with which the ball rolls. Officially, it is classified as a slot machine, while the outcomes resemble that of roulette.

This device has been challenged in the State Senate, but the outlawing of it hasn’t been passed. At least not yet. With the upcoming legalization of online casinos in United States, the traditional regulatory interpretations of what a game represents will get increasingly blurred.

There is something else in the pipeline. Legal craps in Florida. Some ingenious engineers devised a craps table, where instead of a dealer, robotic hands controlled by a computer toss the dice. The gambling operators in Florida and other states are looking into it. There is also a possibility of a blackjack that will not count as blackjack under legal interpretations.

The benefits to the Sunshine State when it comes to such devices is that these are computer-based machines which account perfectly for the wagers and the taxes due to the government. The critics of classifying roulette-like or craps-like games as slots claim that when the voters agreed to allow the slots in the state, they didn’t have in mind such devices. Or, perhaps the voters aren’t as stupid as the politicians think?