New and Improved BetOnline Live Betting Available to US Players

The new US live betting software promises changing odds during the game. 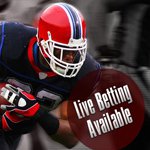 BetOnline, one of the few sites that accept US players despite the present unfavorable American gambling laws, added a new and improved live betting software to its portfolio.

The allegedly Europe-based live betting service allows the players to place bets during game action. The odds change constantly as the game progresses.

Live betting, also known as “in-game betting” and “in-running”, is increasingly popular among those who bet on sports in US. BetOnline was one of the first US-enabled sportsbooks to add live betting to its services about two years ago.

Company top man Dave Mason promised that BetOnline will feature the best live betting software on the market as well as a wide range of games to put wagers on.

The BetOnline executive explained: “A major reason why live betting is nowhere near as popular in the states as it is in Europe, is due to the fact that the software most Euro sportsbooks utilize is far superior to the software US facing books use,” Mason opines.

Mason added: “Because of this, Euro books can keep their lines open longer and have a much larger offering.”

Most US online sportbooks keep their odds open only during timeouts and in between innings. BetOnline promised constantly changing odds as the action folds on the playing field. Also, using the new feature, BetOnline’s traders will be able to leave their odds open much longer during the game.

Mason commented: “Over the next few days alone, our players will have access to ten NFL games, nine college football games, three days of Ryder Cup action, plenty of soccer matches, a couple UFC fights, the WNBA playoffs and even a Cricket match.”

Mason went on adding: “And they’ll also be able to bet Live in-game props on many of these games as well.”