Spain is Out of the Top 10 FIFA Ranking 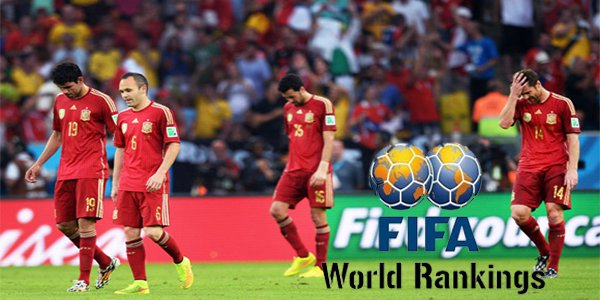 Spain has dropped to the 11th position on the latest FIFA Ranking which is the worst standing of the Mediterranean country since 2007.

Spanish gambling news report that FIFA has announced their latest Ranking of the national teams in which Spain is ranked in the eleventh position. This is the worst ranking the Iberian country has gotten since January 2007, when they were ranked as the 12th best national football team in the world.

Germany have been reckoned as one of the main favourites before the World Cup in Brazil and winning the tournament has resulted in taking over Spain’s position as leader on the charts. Other World Cup finalist Argentina are in second place, while Colombia are on the last one on the podium.

There are 2 South American teams in the top three, but online gambling sites in EU stated that European teams stand out the most out of all the rest. 29 different nations from the Old Continent are participating in the list of the top 50, while the second one is Africa with 11 representatives. Asia on the other hand has only 1 name on this list.