Video poker is coming to hundreds, even thousands, of pubs in Illinois. Have a beer and gamble. 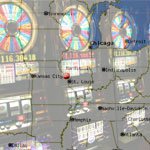 Here we bring another story on the battlefront for legalized gambling in the Land of the Free. Hardin, a village in Illinois that few people know, is amending the regulations under the American gambling laws as they pertain to the local neighborhoods.

The new proposal is seeking to allow gambling in pubs by allowing video games. This move can result in hundreds of pubs carrying on these gambling devices. This would cover games such as electronic blackjack or poker, in effect, making local pubs act as a new version American poker rooms. It’s an ancient tradition: combining drinking and playing poker.

This proposal is likely to spread throughout Illinois cities, towns, and villages. It is estimated that as many as 4,000 locations could by licensed to allow for video gambling by year’s end. That’s thousands of machines the gambling equipment makers will look to sell.

On the other side, there are pubs which offer unlicensed poker machines and these places can’t pay out winnings. If the owners of these machines decide to pay out prizes despite, they may face prosecution for illegal gambling.

Furthermore, those caught with illegal gambling operations will never be licensed. Thus, it is better to apply and wait then risk running an illegal poker.

The pubs that get a license will also need to sign up with a gambling computer terminals operators, which are licensed as well. But, as in UK and Australia, poker machines are coming to America, albeit slowly.

Those who can’t wait may seek to play at online casinos in United States or even play mobile poker on their smartphones once in a pub.