Will Real Madrid Win Everything This Season? Check Out The Odds!

News >Will Real Madrid Win Everything This Season? Check Out The Odds! 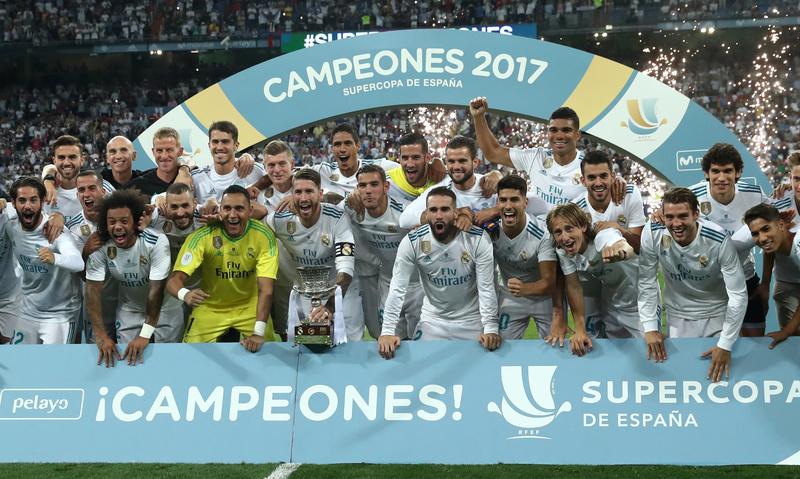 Okay, let’s face it, the season has hardly even started yet and they are already counting 2 trophies, so they need only one more left to win the Treble. But so far they seem unstoppable. Will Real Madrid win everything this season?

It doesn’t sound impossible at the moment. Real Madrid were the strongest football team in the world last season. They marched confidently against any massive that came across, could it have been Bayern, Barca, Juve… Online sportsbook news sites in Spain just cannot stop praising Zidane’s outstanding team performance.

Their form doesn’t seem to be dropping for this season either: Real Madrid just started the new season but they already won two trophies: the UEFA Supercup as well as the Spanish Super Cup. They were extremely confident and played a very mature game. Not Manchester United nor Barcelona had a chance to beat Zidane’s White Army. But how long can this unstoppable form go on?

There was only one trophy last season that the Zidane boys failed to win: they were eliminated from Copa del Rey in January thanks to their poor performances against Celta Vigo. This year it’s time to prove that they are capable of taking the trophy from the Blaugrana. Real Madrid will be favourites for Copa Del Rey 2018, let’s see if it means anything at all!

Real Madrid were not the biggest favourites to win La Liga last season because Barcelona seemed to have been stronger. Howeve,r the Galacticos proved themselves to be far stronger, despite the fact that they lost El Clasico thanks to the amazing performance by Lionel Messi. Can they win the 34th La liga title in the history of Real Madrid this season? According to the online sportsbook directory, they are the clear favourites to do so…

They gave no chance to opponents in Spain…

Can Real Madrid win Champions League 3 times in a row?

Winning the Champions League is always like making a dream come true for all football clubs. It never gets boring, not even when your team wins its 12th title, or when they won the competition 3 times in 4 years. You jut want it again as soon as the next season starts. And that hunger feeds Zidane’s men as well.

Nobody has ever defended its Champions League title ever since its called that way. Nobody, until the unstoppable Zidane team. Can Real Madrid make history by winning Champions League 3 times in a row? If they continue playing this way, the idea won’t seem so impossible…

…and they gave no chance to opponents in Europe either!

Bet on Real Madrid to win the Treble!

How many trophies will Real Madrid win this season?

It sounds almost impossible but the best football team in history has never won the Treble. Meaning, there has been no year in football when Real Madrid won Copa del Rey, La Liga and the Champions League at the same season. Their obvious goal for this season is to make history once again, for the hundredth time.

If you are looking for the best odds at online sportsbook sites in Spain in hopes of placing a bet on Real Madrid to win the Treble, you better check out the latest review about Betway Sporsbook before signing up for a new account. Here you can find Special Real Madrid betting odds to win on their number of trophies. Enjoy!