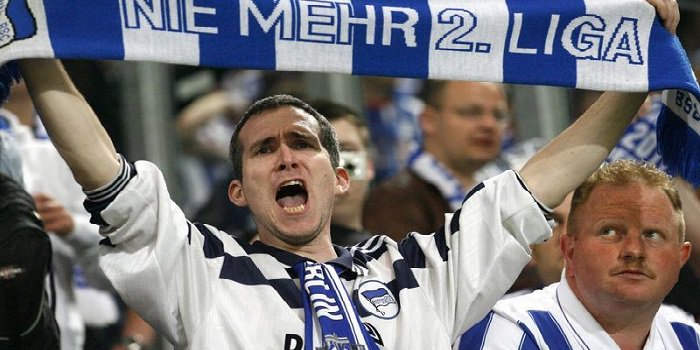 The Championship playoffs and the Bundesliga relegation battle will be the highlight of the weekend.

Apart from the La Liga showdown and Steven Gerrard’s last game at Anfield Road, there will be plenty of footballing action this weekend to please the mobile betting audience. Champions League qualification, relegation battles and promotion fight – this is the programme for most of the football fans across Europe. Manchester United takes on Arsenal in the Premier League on Sunday, while the biggest East Anglia derby ever is to be staged in the Championship on Saturday.

Manchester United will host Arsenal on Sunday afternoon in a match that could determine the fate of the third place in the Premier League. Arsene Wenger’s team leads Louis van Gaal’s men by two points and they have a game in hand too. So, it looks like the Old Trafford outfit will have to play some nasty Champions League qualifiers in the summer, while the London side will land in the group stage instantly.

• United or Arsenal to start UCL early
• Who gets to Wembley from East Anglia?
• Five teams in danger in Germany

However, if Wayne Rooney and his mates will defeat the Gunners, they can still hope for getting the easiest schedule, as Arsenal will have to prove themselves against Sunderland and the giant-slayers, West Bromwich Albion during a week long period. Of course, United still have to put Hull aside in the last round, which might be not the easiest task, as Hull should try to escape from the relegation zone.

However, if the Red Devils hammer Arsenal, they could easily seal Hull’s destiny as well. Of course, Hull’s campaign could effectively end on this weekend, if they fail to pick up points. The Tigers lost their last two games while none of their rivals suffered a defeat last week, so it seems that they will play in the Championship next year alongside Queens Park Rangers and Burnley.

With Chelsea had been crowned as champions already, the most exciting English game for users of online sportsbooks in the UK will be the battle of East Anglia between Ipswich Town and Norwich City this weekend. The two Championship sides will fight for a place in the Wembley playoff final, so no less is at stakes than a place in the Premier League, the world’s most recognized national championship.

The teams drew 1-1 at Portman Road last Saturday, which means that everything starts from zero, as there is no away goals rule in the Championship playoffs. This was abolished actually after a club initiative from Ipswich Town after they lost twice on away goals in 1997 and in 1999. Norwich City manager, Alex Neil led Hamilton Academical to promotion in the Scottish second-tier as a player-manager a year ago, and now he tries to accomplish something similar from south of the border, without pulling City’s yellow shirt on himself.

Bundesliga will be the most exciting

In France Paris Saint-Germain are champions virtually, while Marseille and Saint-Etienne are racing for Champions League qualification with Monaco, who considered as favourites for the third place by those who bet on sports in the France. Lens and Metz will play in Ligue 2 next year, however Evian TG have a slight chance to avoid going down. Even thirteenth placed Caen is in some kind of danger, and they will entertain Evian in the final round.

In Italy there are three rounds to go, with Juve as champions and Cagliari, Cesena and Parma all booked for Serie B football next year. Napoli still have a shot at Champions League football, but it won’t be easy for them to catch either Lazio or Roma. However as the Blues take on the already relegated Cesena on Monday, they can edge closer to the capital teams if they lose points.

The picture on the top of the Bundesliga is pretty much the same. However in Germany the relegation battle is all but done, as all the teams in the last five places are within one point. Four of them play each other this weekend and this will be the core of this Bundesliga matchday: Hertha Berlin v Eintracht Frankfurt and VfB Stuttgart v Hamburger SV. The games of the last two rounds are all scheduled to the same time, to avoid any manipulation or advantage.

As there are only a few weeks left from the European club season, anyone who wants to make money on football games should login their accounts to place some wagers. Okay, there will be the Copa America in the summer, but with the late night kickoff times, it will be match harder for those, who prefer the live betting service of the online gaming destinations.