UK national lottery operator Camelot is in the business of making millionaires, and Andy Carter is their man on the ground. 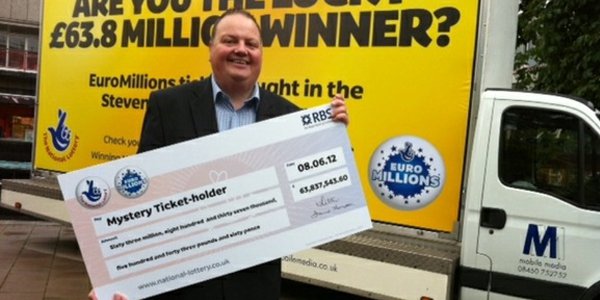 UK national lottery operator Camelot is in the business of making millionaires, and Andy Carter is their man on the ground.

Andy Carter of Camelot, the UK’s national lottery operator, has a very unique profession. While most boys wish to grow up to be footballers, firemen or businessmen, Carter has always had a passion for making others smile. In his adult years, that has translated into a career as a representative for Camelot. His job is to visit the homes of people who have won GBP 50,000 or more playing the national lottery. He knocks on the door, introduces himself, checks the winner’s ID and scans their lottery ticket. He even transfers the winnings into their bank accounts right there on the spot.

But his job is about much more than scanning tickets and transferring funds. Carter is in the business of helping people. Helping them deal emotionally with life changes coming from winning a large sum, and, in many cases, helping them to keep the news a secret. Playing the lotto has been an institution in Britain since British gambling laws were amended in 1934 to create the national lottery. Camelot was granted a monopoly license in 1994, and Andy Carter has been visiting lucky winners since 2006.

The business of making people happy

• 25% of Camelot’s lotto sales are made online

• Andy Carter transfers winnings to customers on the spot

While some in Britain don’t look upon the lottery positively, Camelot sees itself as being in the business of making people smile, which is exactly why Carter is happy with his career choice: “I absolutely love it. It is a unique job. You are with someone at a life-changing moment.” Camelot pays out six million-pound payouts in a typical week, with Carter visiting about 160 homes per year. While he is not allowed by his employer to buy lottery tickets, he stated that all his time spent around winners has made him an optimist, and that he has even dealt with some people who have won the lottery twice.

Carter’s favorite part of his job is observing the reaction of the winners, who are often as worried and confused as they are happy and exhilarated. Some new millionaires quit their jobs on the spot, while others have phoned Carter telling him they’re not available to meet because they can’t get any time off work. Then, “you get people who are very quiet because they’re in shock.” Lottery providers such as Camelot sell hope, the belief that one’s fortunes can change in an instant if luck happens to shine upon them. And as Camelot has transferred one million GBP or more to over 3,600 people across Britain, that luck isn’t as elusive as one may think.

Carter on the anonymity of winners

Data provided by Camelot finds that only 15% of lotto winners in Britain choose to go public with the news. Some of these people do so because they want fame to go along with their fortune, while others feel that they won’t be able to keep the secret from becoming gambling news. It isn’t difficult to sympathize with the other 85% who ask Carter for advice on how to keep things quiet. Horror stories of lottery winners being hounded by total strangers, former classmates and distant relatives in need of money abound in all societies. But the desire for anonymity is not always for the reasons we would expect.

Some people are happy with their current state of affairs and don’t want the influx of cash to change their relationships. Carter spoke of one man who didn’t even want his wife to find out: He was pacing around and asked me how long it was going to take. I said, “forty-five minutes”, and he told me that his wife had popped out to Tesco and she didn’t know about the win. He wasn’t going to tell her. He said they were perfectly happy and very much in love, but she was not interested in the money coming in.

How technology is changing the lottery industry

The rapid tech advances of the past two decades have drastically changed how people gamble in Britain, with mobile betting apps making the betting shop go the way of the dinosaur and internet casinos taking a bigger market share. Lottery isn’t exempt from these changes, and Carter mused on some ways in which Camelot is using new technologies to serve customers. For example, until five years ago the lotto operator paid out winnings in the form of a check, which customers had to personally pick up at the Camelot office. These days it’s much more convenient for the winner, as Carter personally visits them. However, some winners still prefer to come receive their winnings personally, and enjoy an afternoon in the “winner’s lounge.”

Camelot also reported that currently 25% percent of its sales are conducted online. While some expect this number to increase, Carter is skeptical, as in his opinion, “people like the ticket.” While tech is changing the way that lotto works, the business itself hasn’t changed. Lotto is still in the business of putting a smile on people’s faces, and that is something that won’t change.