Are The Kiwis A Safe Bet On Sailing In The America’s Cup?

News >Are The Kiwis A Safe Bet On Sailing In The America’s Cup? 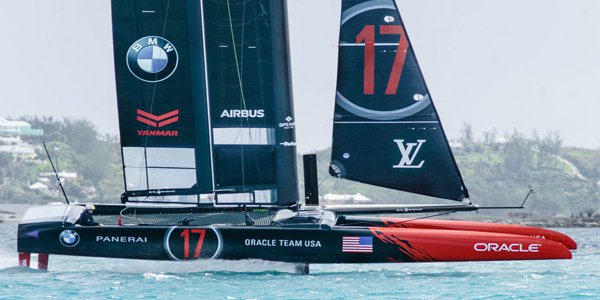 The America’s Cup is underway but the defenders Oracle Team USA aren’t putting up much of a fight and as Emirates Team New Zealand pull three races ahead we check out if they’re a good bet on sailing this weekend.

The America’s Cup is, we are told, affectionately known as the “Auld Mug” which, frankly, describes anyone willing to participate in what is, these days, windsurfing with pretensions. Perhaps back in 1851 the yachts used actually touched the water, but these days at speed the hull barely gets wet, the racing catamarans riding like hydrofoils some way above the wavetops. However as far as it has evolved from its origins the America’s Cup is still one of the only opportunities to bet on sailing on the calendar.

Originally the race was around the Isle of Wight, and if that doesn’t sound very American that’s because it’s only a couple of miles off Portsmouth in the UK across the Solent. When an American yacht won the vessel was then donated to the New York City Yacht Club with a proviso in the deed of gift specifying an annual race for the newly named America’s Cup, and thus a tradition was born. This year however anyone in the US apt to bet on sailing is unlikely to skirt US gambling laws to back the US in retaining the trophy.

Bet On Sailing At Bet365 This America’s Cup

There are only two boats in this first-to-seven race series held in Great Sound, Bermuda, with the Golden Gate Yacht Club currently defending with their Oracle Team USA boat as the Royal New Zealand Yacht Squadron and their Emirates Team New Zealand crew try to wrest the title away. This is Oracles second defense of the trophy but four years on their performance has been, to say the very least, a little poor and if you like to bet on sailing it doesn’t take an Oracle to spot that the US is going to lose.

The Kiwis went into a three to nothing lead in their AC50 leaving the US with a massive mountain to climb if they want to get back into the competition when the teams get back on the water this weekend, their skipper Jimmy Spithill admitting it was “pretty obvious” his team needed to “get faster” which for those of you that like to bet on sports in the US is like a football coach coming out after the game and saying the team needs to score more touchdowns. A sensible bet on sailing does not include the US right now.

Unfortunately this dominance has meant that the Kiwis are at awfully short odds at sites like Bet365 and so they’re not the most attractive bet on sailing. Sure, they’re almost guaranteed to win, the bookies barely giving the US a 7/2 chance of pulling this one round, but at 1/6 the Kiwis have it all to throw away and if there’s anything more fickle than wind and water it’s not on Wikipedia. Anyone in the US gambling news headlines will boom with an amazing comeback are dreaming, they’re just not fast enough.

Of course there’s always the unexpected. The race was marred before its start with legal wranglings and arguments about the size of the boats, and there’s every possibility that your safe bet on sailing backing the Kiwis in the America’s Cup could fall prey to that unforeseen instance that changes everything. A collision, a sinking, perhaps a small fire? Anything is possible, so whilst you can pretty much write the Americans off, I wouldn’t bet the farm on the New Zealand contingent at Bet365 with wholehearted abandon this weekend.