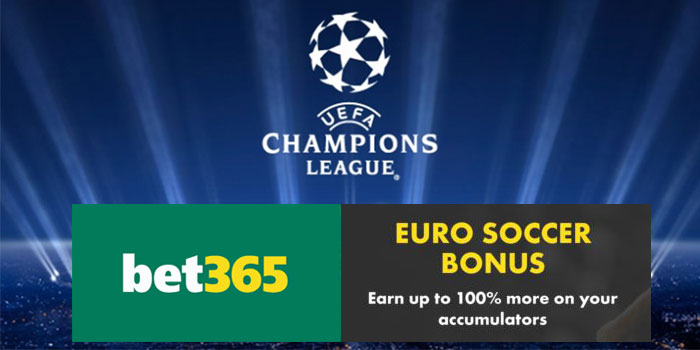 This week’s Champions League second legs should be dramatic: read on for the best odds you can find online!

When betting on this week’s Champion League second legs, go to Bet365 Sportsbook to take advantage of their fantastic Euro Soccer Bonus. The online sportsbook will provide a bonus of up to 100% on accumulators placed on Champions league matches, or the top domestic leagues in Europe.

If you place a pre-match acca with three or more selections on Full Time Result or Result/Both Teams to Score, you’ll get a bonus if you’re successful (so long as you don’t cash out)! Check out terms and conditions at Bet365 Sportsbook. Now, let’s get to the action!

Our picks for the Euro Soccer Accumulator at Bet365 Sportsbook!

The most tantalising of Tuesday’s Champions League second legs is Roma’s visit to the Bernabeu. The Italians have reason to be hopeful: they have won their last seven league games, and they are actually one of only three teams to have a positive record away to Real Madrid! However, the good omens end there…

Real Madrid won the first leg 2-0 and there’s no reason to predict that things will be different on Tuesday. The Spanish giants are unbeaten in the competition, and have scored the equal highest number of goals, 21. What’s more, if you bet on sports in Spain, you’ll know this weekend they beat Celta Vigo 7-1, with Ronaldo bagging four.

Roma star Miralem Pjanic says Roma will “try to put in a perfect performance”; if they are to win then they’ll have to! If you fancy their chances then back them to Win to Nil, 17.00 (16/1). However, Real Madrid to Win, at 1.40 (2/5) seems a safe bet to add to your Euro Soccer accumulator.

This might not get star-billing, but their match in Belgium had the most goals of all of the Champions League first legs! Wolfsburg reached 3-0 at the hour mark, thanks to two goals from 22-year-old sensation Julian Draxler. The tie seemed over until the last ten minutes, when Gent somehow managed to grab two goals!

Neither side have ever reached the quarter finals, and Gent will fancy their chances of carrying on their momentum: they are 7.00 (6/1) to win on the night. The Belgians have scored in all seven of their Champions League games so far this season, while home side Wolfsburg will be confident of netting at least once. Gent to Win and Both Teams to Score at 11.00 (10/1) is a perfect addition to your Euro Soccer accumulator on Bet365 Sportsbook.

If you bet on sports in the UK, the most exciting of this week’s Champions League second legs will be taking place at Stamford Bridge. Chelsea will hope to overcome the 2-1deficit, after PSG won in Paris, but their performances so far this season suggest otherwise.Both teams drew this weekend in the league, but that’s the only similarity their campaigns’ share.

Chelsea are in 10th place, twenty places off league leaders Leicester City. PSG, meanwhile, lead Ligue1 by 23 points, with a goal difference 43 higher than their nearest rivals! If you’re looking for a safe bet, go for PSG to win at 2.7 (17/10). If you reckon Chelsea will do what they did in 2012, playing poorly in the league but succeeding in Europe, Chelsea and Both Teams to score is 5.5 (9/2) at Bet365 Sportsbook.

There is all to play for in the last of this week’s Champions League second legs. Benfica won in Portugal, thanks to a header by Jonas, who has scored 26 goals this season despite being known as the “worst striker in the world” back when he played for Brazilian side Gremio!

André Villas-Boas, in his final season managing Zenit, will back his team to get the job done in Russia. If you have faith in him, add Zenit to Win, at 2.1 (11/10), to your Euro Soccer Accumulator. However, with Jonas in such great form, it’s hard to bet against the Portuguese league-leaders to finish what they started.

Champions League second legs best bet:
Benfica to Win and Both Teams to Score at 8.00 (7/1) on Bet365 Sportsbook