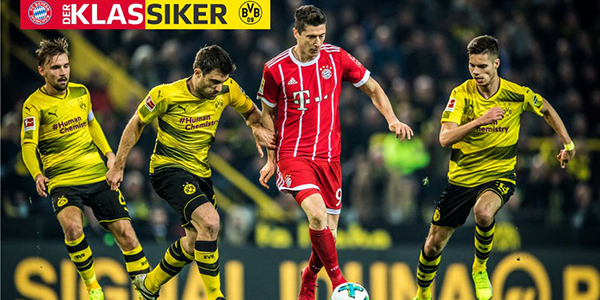 It’s all about Der Klassiker this weekend, and in case you’re not familiar with German football it’s the biggest derby in Bundesliga (where have you been living so far)? So don’t miss out on the chance to bet and witness superb action this Saturday, along with all the other encounters scheduled for round 28.

Come on. It’s practically expected that Bayern will snatch an easy victory at the Allianz Arena, especially since Dortmund have been underperforming for some years now. Although Die Roten are 17 points clear at the top of the Bundesliga table, it’s worth noting that over the last 5 rounds they’ve lost against RB Leipzig and drawn against Hertha Berlin at home.

BVB on the other hand are currently in third, having managed to climb up the table in recent encounters, despite suffering 2 setbacks in the last 2 rounds, that saw them draw to both RB Leipzig and Augsburg. But let’s compare the main attacking threats of each side; Lewandowski is already on 32 goals until this stage (overall), while his counterpart at Dortmund Batshuayi is on 8 goals (overall) sinced joining from Chelsea on loan in January.

Although Bayern are the strong favourites to win this match per online sportsbooks in Germany, if betting on the game is not on your agenda, then you might want to consider placing odds on one of the players to find the back of the net in Der Klassiker.

Red Bull’s team used to be a major force in German football merely a few seasons ago, but now it seems that their momentum has dissipated; after 27 rounds in Bundesliga they sit in 6th position with 43 points. Hannover has not been performing well either – standing in 13th spot with merely 32 points – but Leipzig have been on a low track lately, losing twice before drawing on two occasions and then clinching only a single victory from the last 5 matches.

RB Leipzig have fallen down the pecking order and are now in 6th (source: Bundesliga)

Hannover will be playing in front of their home support but looking at their track record this season, we’re willing to bet this match will end up in a draw between the two sides.

And lastly, Bremen – who are in 12th position – will take on fourth-placed Frankfurt at home, which could go a long way in helping them get a point from this game, since a tie seems like the most realistic assessment for this encounter.

Providers of internet betting in Germany are currently favouring Bremen for the win, but we’re sceptical about that; their home record stands at 5 wins, 4 draws and 4 losses from 13 home games. Frankfurt on the other hand have lost 3 straight games over the last 5 away rounds, but they’re still deemed a stronger side overall, so we’re willing to place our bets on a draw.