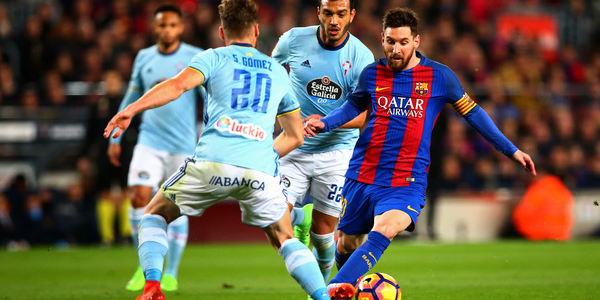 The Galicians seem to be the only team who could deny the Catalan giants King’s Cup this year, beating them three times in their last seven meetings and holding the La Liga leaders to a 2-2 draw at the Camp Nou. Could Barca overcome Celta Vigo on Jan 11? Bet on the second leg of Copa del Rey last-16.

On their first match in 2018, Barca were unable to capture victory when they visited Balaidos. Although Barca B striker Arnaiz was able to score in his third successive cup appearance when he finished off a low cross from Andre Gomes, Celta Vigo’s right winger Pione Sisto scored the equalizer before the end of the first half. With many unsuccessful second half attempts the game ended in a draw 1-1. The last time Celta Vigo won at Camp Nou was in 2014, but they were able to finish with 2-2 draw recently in La Liga. Could they do it again in 2018? Check the preview before placing a bet on Copa del Rey last-16.

All they need two goals and a draw if not to win at Camp Nou. This is Celta Vigo’s bid when they take off on a journey to Barcelona. Thus it may seem to be an easy bid after two draws in a row both at home and away, but this time online sportsbooks in Spain expect Valverde to unleash the full force of Barca in order to keep the run for a fourth successive Copa del Rey title.

However sending Barca’s best players to the pitch will certainly not be the answer for Valverde. In the first leg of last-16 he gave final 20 minutes to the long-awaited Ousmane Dembele, but Dembele failed to bring victory for the Catalans. In early December both Lionel Messi and Luis Suarez played against Celta Vigo at home and scored, but they could not also win the match. It is obvious that a complete first team for Barca will not bring victory if Valverde does not come up with strong defense plan.

Bet on Copa del Rey last-16: Should you pick Barca or Celta Vigo?

Online sportsbooks in Spain expect the Galicians to cause the Blaugrana some serious problems. It will be a fierce clash with possible goals at both ends. However probably Barca had enough with Celta Vigo’s spoiler and this time Valverde’s men will put their best effort to avoid a third draw.

If you believe Barca will be able to overcome Celta Vigo at Camp Nou, we recommend you to visit Bwin Sportsbook, and to check the best Copa del Rey last-16 odds. Barcelona have the upper hand with 1.15, while the odds for an unexpected win to Celta Vigo stand at 14.00. You may also bet on a third draw with odds standing at 7.75.