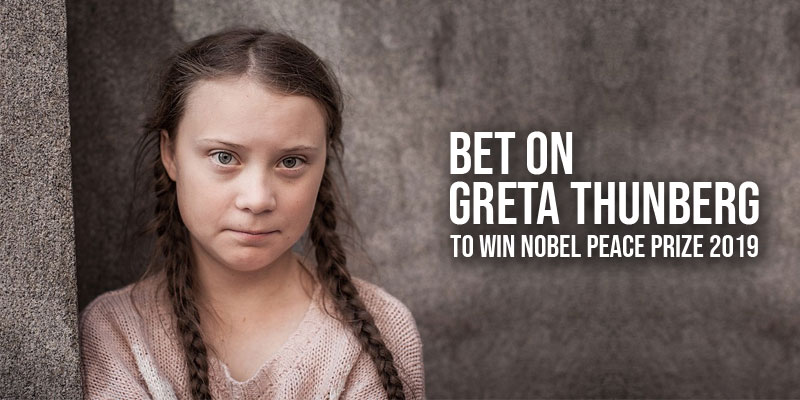 The 16-year-old Greta Thunberg gained worldwide attention due to her sustained climate activism. Despite her age, she spoke on many conferences and demonstrations and received countless acknowledgments for her efforts. Bet on Greta Thunberg to win Nobel Peace Prize, she is definitely the Bookies’ favorite this year on Unibet Sportsbook.

In 2018, Greta Thunberg was amongst the world’s 25 most influential teenagers by the Time magazine. On the occasion of the International Women’s Day Thunberg was proclaimed the most important woman of the year in Sweden in 2019.

Climate activism at a young age

If anyone thought that kids cannot contribute to climate awareness, Greta (2.25) proved them wrong. At the age of 15, the young activist started skipping school to sit down outside the Swedish Parliament to protest. Her school strike for climate awareness became well known within Sweden and abroad as well.

For the first time, she was protesting on 20 August 2018, alone. However form the second day on, people started to join her. She did keep her promise to protest every single day until the Swedish national elections. Many see her as a great role model of the climate fight, as she is indeed putting pressure on politicians.

It all started with a small change

Greta’s mom gave up flying, which had a great influence on her career as an opera singer. On the other hand, her father became a vegetarian. All this due to Greta’s persuasion and arguments. After, realizing that her parents listen to the facts and can change their behavior, the youngster decided to go public.

Certainly, the teenager is making a difference. Greta gave a speech the World Economic Forum, in the UN climate talks, and have shared the stage with the most influential politicians. Needless to say that Greta became vegan herself and only travels abroad by train.

The movement started by Greta is growing bigger and bigger all around the world. The march such a young girl managed to generate astonish even veteran climate campaigners. Due to social media, Greta’s strike spread with the speed of light to all corners of the world.

Thousands of students are joining the movement. Moreover, thousands of scientists are supporting the action. A global debate has started about climate and the environment, which is a great step forward.

Greta’s fight is not over

Even though the youngster has a tiresome schedule, she keeps highly motivated. She is still spending her Fridays outside the Swedish Parliament. Until the government’s policies are in line with the Paris climate agreement, Greta will continue this activity.

Greta is showing a great example of commitment and persistence. She is such an inspiration to not only to schoolchildren but adults as well. Hundreds of thousands of students at schools around the world strike in an effort to urge their leaders to act.

Nomination for the Nobel Peace Prize

As the Norwegian Socialist MP stated, Greta’s nomination is an important message. If we do nothing to halt climate change, it will be the cause of wars, conflicts, and refugees says the MP. The mass movement started by Greta is perceived as a major contribution to peace.

According to online sportsbook sites in Sweden, Greta could be the second individual to win for work on climate change. The first was former US vice-president Al Gore. Although, Gore was awarded in 2007 alongside the UN climate science group, the Intergovernmental Panel on Climate Change.

This year, there are 301 candidates for the 2019 prize. 223 individuals and 78 organizations have the chance to take the prestigious acknowledgment. Bet on Greta Thunberg to be the youngest person to win Nobel Peace Prize this year. Check out Unibet Sportsbook for more!