Bet on the next Everton manager being Mark Hughes! 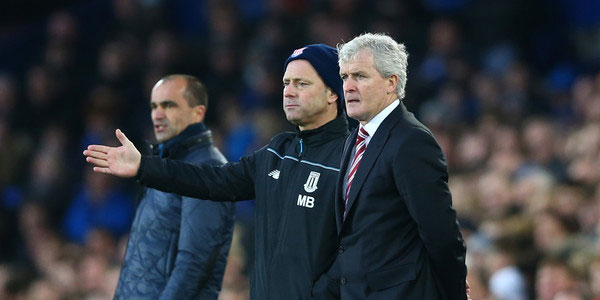 Bet on the next Everton manager being Mark Hughes. It might seem crazy, but rumours suggest he’s the favourite. We’ll explain why.

If you bet on sports in the UK, you’ll likely have given up hope with Everton. Since September they have only managed league wins against the bottom three and (an off-form) Stoke. They may have reached the semi-final of the FA cup, but with players like Romelu Lukaku, they should be doing far better in the Premier League.

The Everton board will have to act before Martinez is done transforming the Toffees into his Wigan team: great cup runs, lovely attacking football… but an inability to defend resulting in relegation. Here’s who could replace him:

The Chilean will be leaving Manchester City in the summer, and online sportsbooks reckon he won’t be going far. City may have disappointed this season, but his team still have a chance in Europe (though we wouldn’t bet on City to win the Champions League). He was the first non-European manager to win the Premier League, and did so with his team scoring 151 goals in all competitions: a British record. He’d be a tempting appointment, but he might fancy a more prestigious job on the Continent instead.

After failing at both Manchester United and in Spain, could Moyes be tempted back to where he made his name? Or maybe the question should be: would you bet on Everton to want him back? Although they could use a manager who could coach a defence, and he did make them a reliable top-half team, the Everton fans seemed quite disillusioned with him by the end of his time there. The Blues new billionaire owner Farhad Moshiri will likely want to make a break with the past.

With Everton’s group of talented youngsters, they may want a talented young manager to coach them. Eddie Howe has excelled with Bournemouth, taking them from League 2 obscurity to Premier League security. Even better, he’s an Everton fan. However, he might not feel like the job is enough of a step up: the teams are currently level on points.

According to the Daily Mirror, Everton’s board are actively pursuing the Welshman who played for them back in 2000. He has impressed at Stoke, taking them to their highest ever position and points total, though with the help of several high profile signings. His previous big job, at Manchester City, ended in dismissal but in retrospect he played an important role in the club’s progression. If you trust the press, bet on the next Everton manager being Mark Hughes!

Bielsa, most recently seen managing Marseilles, is the football hipsters’ choice. If he does become manager, bet on Bielsa having some high-profile disagreements with the board. His attacking style is great to watch and he could be a hero, but like Martinez his team’s defensive records aren’t always great. His ideas are thought very highly of by Spurs manager Mauricio Pochettino, but bet on the Everton board not being willing to risk confrontation with the man they call El Loco.

A final contender for you to consider before you bet on the next Everton manager is Ajax manager Frank De Boer. He won four consecutive league titles in the Netherlands, and despite missing out last year, may win a fifth in 2015.He is the most capped outfield player in Dutch history, and he played for both Ajax and Barcelona. Don’t bet on him becoming Everton manager, though. Going to a mid-table club may be a step-down for a multiple league-winning manager, and breaking into the English elite would require an entirely different skillet to dominating with Ajax.