Bigger Than Ever: 7 Reasons Why the 2014 WSOP Could Be the Biggest Poker Tour so Far 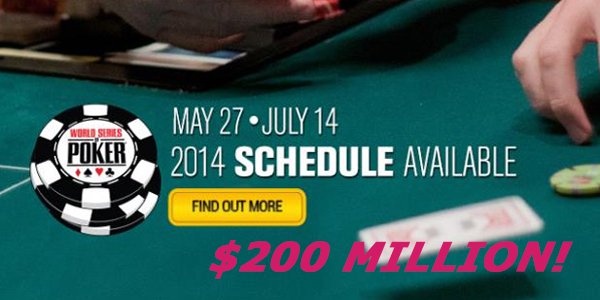 100 players are expected to qualify for the Main Event of this year’s WSOP, competing for a $10 million guaranteed prize.

Nevada is one of the few states where gamblers are allowed to play online poker in the US, but every year Las Vegas prepares with a much more appealing offer for fans of the game: the World Series of Poker.

Here is a list of the biggest prizes won at the WSOP Main Event:

This year, the world’s best players will gather in one of the most popular American poker rooms for the big event, which runs between May 27 and July 14, at the Rio All-Suite Hotel and Casino. Organizers are very optimistic about this year’s edition, which promises to be bigger than ever.

“There is real optimism 2014 can be our biggest year yet with an anticipated $200 million in prize money to be paid out this summer,” WSOP Executive Director Ty Stewart told reporters. “With new satellites and daily tournaments exclusively on WSOP.com and a plethora of side events, there is more reason than ever to make the trip to poker Mecca.”

This year’s poker tournament will include the following $10,000 competitions:

1. $10 million guaranteed for the winner

This year’s edition of WSOP will include a special Main Event. The winner of the competition will get his hands on a $10 million guaranteed prize, ensuring the second largest prize in WSOP history. Jamie Gold was the only player who managed to top that prize, scoring an incredible $12 million win in 2006.

This year, organizers expect around 100 players to make it to the final event, which is scheduled to begin on July 5. Participants will have to pay the usual $10,000 entry fee.

In 2013, the WSOP brought a total of 79,471 poker players to Las Vegas. Last year’s edition featured 62 bracelet events and a $197 million prize pool. Tournament organizers anticipate an even bigger attendance this year, with the total prize pool exceeding $200 million.

The 45th Annual World Series of Poker will include 65 bracelet events and 32 of these are expected to be live streamed.

3. Big One for Once Drop is back

The charity poker event is making a comeback after a one-year hiatus. Organizers have prepared a total of 56 seats for the Big One for One Drop competition. More than half of the $1 million buy-in spots have already been filled and if the cap is reached, the winner will be able to take around $20 million.

The Millionaire Maker and the Little One for One Drop are also returning to the schedule. The first one will take place on Saturday, May 31, and the latter is scheduled for Thursday, July 3.

Three staple tournaments are making a comeback this year: the $50,000 Poker Players Championship, scheduled for June 22-26, the Seniors Event, taking place on June 6-8, and the Ladies Event on June 27-29, which requires men to pay a $10,000 buy-in and offers a discounted $1,000 buy-in for women. The event had 954 participants last year and none of them were men.

WSOP officials opted to reintroduce $10,000 Championship events this year and after conducting a research among professional poker players, they decided to host 12 such competitions.

Organizers are really trying to make this year’s edition an unforgettable one, because they have added some really cool new features, as well as a special 100% bonus up to $1,000 for deposits made during the tournament. Players will be able to make deposits right at the casino.

A SNG leaderboard will be set up during the event and players will be able to participate in random cash games selected for $50 and $100 bonuses. In addition, WSOP ambassadors and customer support will be present at the casino.

Looking to offer a better overall experience, WSOP officials have announced some changes to the poker rooms. The tune-up includes new chairs, a brand new carpet in the convention center, a Hash House A-Go-Go in the Rio, a zip line attraction and indoor blimps, as well as a Frisbee dog show. Whatever that is…

As the local media is expecting more details to be released over the following weeks, we believe the information released so far is proof enough to label the 2014 WSOP as the biggest poker tournament so far.