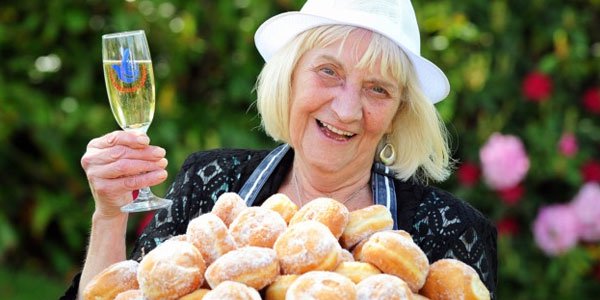 Grandmother decides to quit her low-paying job eight months after winning big in the lottery.

British grandmother decides to retire after winning a sudden lottery windfall under British gambling laws. Jean Swatman, from Lowestoft, Suffolk, has scored a GBP 2 million lottery win eight months ago, and has now decided to quit her GBP 6/hour job as a baker in order to be a full-time millionaire.

Right after winning the lottery Jean still insisted she gets up 5.20AM every morning in order to bake doughnuts for her local Morrisons store. But after she counted to have made over 1.5 million doughnuts during her career as a bakes, she decided to call it a day, capitulating to requests from her family.

The lottery winning grandmother had the following comments for British gambling news: “I really enjoyed my job but I’m enjoying retirement as a Lotto millionaire a whole lot more. Everybody was telling me to retire but it was the thought of 5.30am winter starts scraping ice off the car that finally made me take the plunge and I haven’t looked back.”

She went on to add: “The main difference since winning has been the fact that I have no worries, but I have not really changed. Since I retired I haven’t had time to miss work really – and I have enjoyed the lie-ins. I haven’t made a doughnut since I retired and I don’t miss making them. I will always buy a packet when I go into the store but they are not the same as mine.”

“Nobody made them better than me. My nails have got really long since and I have always wanted them to be painted and shaped. I always wanted to have them done properly but my work never let me“ – Jean Swatman concluded.

Comments from the lottery winner’s colleagues

Jean’s co-worker of three years at the Morrisons called Mrs. Swatman a “lovely lady”, and said: “Jean worked here for so long but she still loved making the doughnuts for everyone. When she left she had a big party at her house and she even bought everyone in the department a bottle of wine and some chocolates. You wouldn’t have known she’d won the lottery – she still came in at 6 every morning and worked really hard. I think she was a bit sad to quit after so long – but who could blame her?”

How the lottery win occurred

Jean Swatman has matched six numbers with a lucky dip ticket eight months ago, resulting in a GBP 2,021,379 jackpot win. Funnily enough she carried the winning ticket for over a day in her purse before actually checking if she’d won.

Upon seeing the numbers first, she thought something must be wrong, but after double and triple checking with friends, Jean finally understood she became a millionaire.

Naturally, Jean went on to pamper herself a bit following a massive win, but then she also helped her family with some real-estate. Jean purchased old houses from her brother and daughter in order to help them buy a new place.

Living a normal life after winning

Mrs. Swatman went on to help paint and decorate her family’s new home with her own two hands. She also became a landlady in the older properties, renting them out to younger members of the family at discount prices.

As for her own accommodation, Jean is still living in a very modest 3-bedroom place in Lowestoft – a nice house with a terrace. The house was bought together with her late husband over 20 years ago. But she has completely redecorated it, installed a new kitchen and other stuff. She says she has no plans to move out to a better place.

More pampering for the grandmother

One of the first things Jean did with the money was to pay off her mortgage. She then took a very exotic trip to Cambodia in order to pay her son a visit. As for the super-car purchase that every lottery winner has to go through, Jean has chosen a rather modest GBP 20,000 Vauxhall.

Jean went on add more comments about her win: “I bought my daughter’s old house so she could afford to move into her new place. I rent that out now. I like decorating it myself, I like to see the result when it’s all finished. I also bought my brother’s bungalow because he wanted to downsize and couldn’t sell his house.

She also said about her living situation: “I am still in the same house. I have lived her for 20 years and I like living here, I like the neighbours. I have redecorated it all and fitted a new kitchen but I didn’t want to leave it.”

We congratulate Mrs. Swatman on her wonderful win and wish her a happy retirement spent among family and friends. Stay tuned for more stories on lottery jackpot winners, and how winners manage to stay normal after a sudden windfall.