California Chrome Arrives to the UK 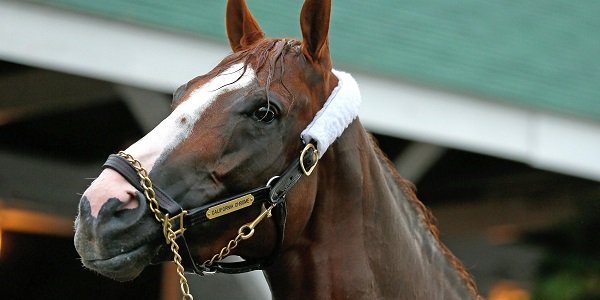 The 4-year-old thoroughbred comes to Europe to show his potential overseas.

America’s favourite racehorse California Chrome arrived to England a few weeks ago, gambling news reported. Although it is not unusual for the weather to be fairly pleasant this time of the year, the endless sunshine is quite rare. It almost seems as if the 4 year old chestnut has brought some of the Dubai weather with him. Newmarket is often thought of as the Thoroughbred capital of the country. Despite being 40 miles inland the wind can still blow your head off as if you were standing right next to the North Sea.

As his plane landed on UK soil, an unexpected rise in temperature was reported. It may sound a bit too magical for many but even the weather gods welcomed America’s darling with open arms. This made the climatization in Rae Guest’s stables easy for the thoroughbred. The stables located on the southern edge of Newmarket are making his stay as comfortable as possible. The morning of April 25 has brought some of the traditional nippy British weather. It happened to be the same morning when California Chrome’s exercise routine was put back in place.

Things are going exactly as planned – the fantastic horse’s competition schedule was updated with the Royal Ascot and the June 17 Prince o Wale’s Stakes (Eng-I). These being major events of the British race calendar require plenty of preparation. The proud steps of the US superstar trotting behind the lead horse were definitely a good tell. Slightly nervous small steps are usually a sign of a healthy race mood when it comes to horses. Those who enjoy betting on sports in the US should keep an eye out for the American talent.

The change of scenery did good for the precious horse

According to Rae Guest, the horses physique has improved significantly since he arrived to the United Kingdom. Previous to his flight from Dubai he participated in the March 28 Dubai World Cup (UAE-I.). The famous British trainer Mr. Guest stated that the horse was in somewhat worse shape than he is now. Dubai have left its mark on Chrome with its dead heat. Making sure he regains his energy for the British race season, the first two weeks were filled with hand-walking and grazing. The only question is whether he can show the British audience the same breath-taking performance he had wowed America with.

Although it is easy for such a great horse to win over $500,000 monthly in the States, he cannot reach up to the legendary standards of the European scene. “Now he has the chance to get into the history books,” said Mr. Guest. Although California Chrome was last year’s 3-year-old champion as well as he owns the Horse of the Year title, the new field could still challenge him quite a bit.

The son of Lucky Pulpit has the advantage of being trained by Rae Guest whose lifetime experience of riding and training has earned him an exemplary record. His Group and Graded stakes winners include unbeaten two-year-old Serious; dual Group 1 winner My Emma, Stakes winning sprinters Millyant, Mirza, Miss Anabaa, Yomalo and Minalisa; Guineas placed Aldbourne; and high class stayers Moments of Joy and Marakabei.

The change of scenery did good for the precious horse

Newmarket is a historic town of England. King James I has built the town’s first royal palace in the early 17th century. The scene being very different to what Chrome is used to could hold many surprises. During yesterday’s training Guest’s new star had the chance to take a look at the monumental castle. His lead horse for the day was Montecristo one of the oldest horses in the stable. He has won 18 races in his time but that was almost 20 years ago. internet betting sites in the UK can prepare themselves for a strong entry by Chrome into the British horseshow scene. His trainer and rider both predict a great success at the Royal Ascot against the European horses.

The first few training sessions presented the young California-bred difficulties. The unusual terrain of the Summer Gallop has caused the inexperienced horse to hesitate for a bit before regaining his pace. Robbie Mills, everyday jockey of California Chrome is positive and believes that he will get used to it soon enough. Mills spent two winter seasons riding for the Shermans at Hollywood Park. His experience gives him the perfect background to get the most out of the American star horse.