Can Brazil Redeem Themselves: World Cup Betting Odds for the Third-Place Match 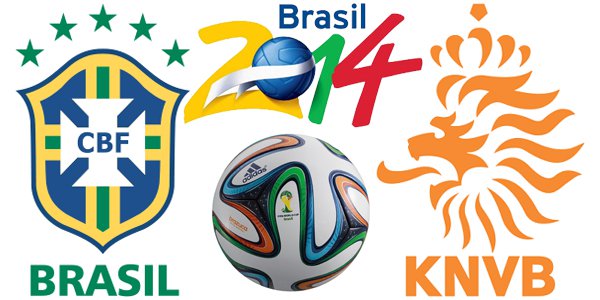 Brazil are looking for redemption against the Netherlands in the third-place game after the humiliating semi-final defeat.

Well, the World Cup in Brazil is almost over with only two games left: the third-place match on Saturday, and of course the final on Sunday. Naturally, it doesn’t mean that betting under Brazilian gambling laws have subsided, in fact more and more punters are coming to place a wager or two on the remaining fixtures.

Brazil will be of course looking to redeem themselves in the eyes of their fans and the whole world after the disastrous 7-1 loss to Germany in the semi-finals. In fact, they are the favorites to beat the Netherlands at online sportsbooks in Brazil. The hosts get a line of 2.30 to win bronze, while the Dutch are priced at 3.10 odds.

The road to the third-place match

• There are lots of betting offers including odds for individual players

We all know how Brazil ended up here, the hosts played without Neymar suffering from injury, and without their key defender and captain – Thiago Silva, who was sitting out a suspension. It was their biggest World Cup defeat ever, incidentally allowing Germany to overtake the Selecao in terms of the most World Cup goals scored. Additionally, Miroslav Klose beat Ronaldo and set a brand new record in for most World Cup goals in history, and yes, he will play on Sunday trying to increase that record again.

All that Luiz Felipe Scolari’s men can do now, is pick themselves up, and try to end the World Cup on a high note. This will provide some consolation to their fans for failing to win the home World Cup for the second time, and will offer punters who bet on sports in Brazil a chance to grab some winnings.

And while Brazil’s loss may be attributed to the absence of two key players, the whole team is to blame if we look at it objectively. All in all, the Selecao need to improve their psychological stance and come to Saturday’s match in Brasilia fully armed.

The Netherlands took the semi-final against Argentina all the way to the penalty shoot-outs, just like the quarter against Costa Rica. And while Louis Van Gaal played a trick with the goalkeeper substitution, which paid off in the quarter-final, he did no such thing yesterday, and suffered a defeat.

Unimpressive Argentina will now go against highly-boosted Germany in the final, while the Dutch will try and compete with super-motivated Brazil in the match for third-place. Holland have lost their only third-place match so far to Croatia in 1998, while Brazil won two out of three so far.

Betting on the third-place match

Just like any other fixture at this World Cup, the upcoming Saturday match delivers a great selection of betting offers from land-based and online bookies. Bet365 gives the hosts a line of 2.30 to win, while the Netherlands had to settle for 3.10 odds, and the tie after 90 minutes is unlikely and will pay at 3.75 odds.

There are lots of side betting offers at Bet365, designed to protect the punters in case the game doesn’t go the way they predicted. The most popular one is the World Cup Penalty Payback which refunds the bettor’s stake in case his picked team loses out on penalties.

Another offer is specifically designed for the goalless draw, a boring match like yesterday’s semi-final. The Bore Draw Money Back Offer refunds punters’ stake on first Goalscorer, last Goalscorer, anytime Goalscorer, the Half-Time or Full-Time scores, the All Correct Score Markets and even the All Scorecast market, if 90 minutes end in zero-zero.

As for the individual players their odds to score are as follows. The heavily-criticized Fred got a line of 2.40 to score at any time, and 6.50 odds to find the back of the net first. Hulk is yet to score for Brazil in competitive matches, so he’ll be trying extra hard and is backed by Bet365 to score first at 7.50 and at 2.80 to strike at any time.

However, Luiz Felipe Scolari might be keen on rearranging the starting team after the humiliating performance against Germany. That’s why Jo and Willian could make an appearance and justify their respective odds of 2.80 and 5.50 to score at any times, and these might be pretty smart bets to make at this point.

But the best bet on Brazilian strikers so far is of course wagering on Oscar, who scored the consolation goal against the Germans in the last minutes. Oscar is priced at whopping 4.33 odds to score at any time and at hefty 12.00 to find the back of the net first.

As for the Oranje boys, who are certainly disappointed to go down to Argentina after penalties, they will also be in a goal-scoring mood, especially after seeing how Germany destroyed Brazil. Robin Van Persie got a line of 2.50 to score at any time and 6.50 to strike first. His partner Arjen Robben got a bit longer odds of 7.50 to find the back of the net first and 2.75 to score during the whole match.

Van Persia and Robben are the only Dutch players still in the running for the Golden Boot award. But they both are priced at whopping 101.00 odds to actually achieve that, and they need to score lots of goals on Saturday to make that happen. As for Brazil, the only player that can still do it is Oscar, but he’s got amazing 501.00 odds, which means it’s practically impossible, unless he showers the Netherlands with goals.