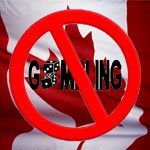 Douglas Quan, a Canadian reporter writing for Postmedia Newsm, feels as though the Canadian authorities should be doing more to stamp out illegal online gambling, much in the same way its neighbor to the south has in recent months, according to recent Canada gambling news.

As the Americans shut out, and in some case shut down foreign operators’ online gambling sites in their country, Mr. Quan demands to know why the Canadians haven’t followed suit.

Under the current Canadian gambling laws, only the provincial governments are allowed to operate online gambling sites, though research done by Mr. Quan claims that there are over two thousands offshore sites that Canadians spend their money in.

Mr. Quan goes on to tell that the legal opinion of such sites is “murky” and that the police do not consider it a top priority to hunt down illegal gamblers or close down offshore sites, since there may be more pressing matters at hand.

This report comes within a week of American authorities closing down Bodog sportsbook, and indicting Calvin Ayre, and three of his associates with charges of running the “illegal” sports betting site. The American authorities have also seized control of the domain of the site. However, the ability to bet on sports in Canada still remains.

One year prior in the United States, Poker Stars, Full Tilt Poker and Absolute Poker were seized in similar circumstances, and according to Mr. Quan the same should be done in his homeland. Mr. Quan states that as much as $4 billion is being spent by Canadians in offshore gaming sites, and that nobody is doing anything about it because there is a “high level of acceptance of offshore operators” by the Canadian authorities.

internet betting is largely forbidden in Canada, though many feel as though betting in an offshore site, means the transactions are taking place out of Canada’s jurisdiction, Mr. Quan writes.

British Columbia, Quebec and the Atlantic provinces are the only regions that permit some form of online gambling, Mr. Quan continued to write, although Ontario may soon join them. Until then, Mr. Quan is of the conclusion that the only way anything will be done to stop illegal gambling sites in his homeland, is if the economic interest of offshore gambling begins to come into play.