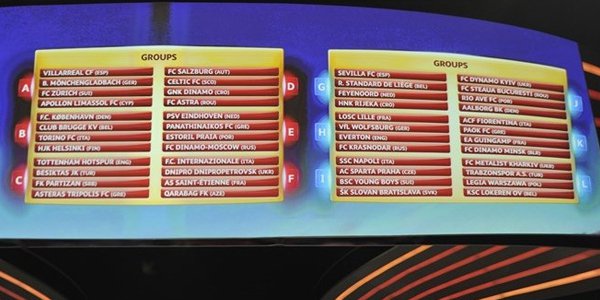 The new Champions League season went underway with a bang, including a couple of unexpected surprises and several heavy beatings. But today it’s time for the second European football tier, Europa League, to kick off its brand new season.

Naturally, Europa League matches also have a huge following among fans betting under British gambling laws. This particular group stage will have lots of traditional rivalries, as some of the biggest names in European football will go head-to-head already at group stages.

There are 12 groups with 4 teams in each, and only 2 best teams from each group will make it through to the next stage. Each game-night will have a whopping 24 matches for punters to enjoy and bet on at online sportsbooks in the United Kingdom. We’ve chosen the most exciting fixtures and will go deeper in analyzing betting opportunities for these matches.

• There are some great battles expected tonight

• Experienced teams and newcomers come together to excite fans

Sevilla are of course the reigning Europa League champions, and just to make you smile we’ll mention a quite surprising reward given to them by the management: each footballer received his weight in beer for winning the trophy. It doesn’t look that beer had a bad effect on them, since the team has shown pretty good form at the start of La Liga, currently holding the 3rd position ahead of both Real and Atletico Madrid.

Naturally, winning Europa League led to player losses during the transfer window with Ivan Rakitic and Alberto Moreno moving on to Barcelona and Liverpool respectively. However, Carlos Bacca was persuaded to stay and has already scored twice in just three games.

Feyenoord are no strangers to winning Europa League, but their successes came way back. They’ve also lost some of the key players including 3 defenders and best forward – Graziano Pelle. The Rotterdam team didn’t manage to qualify for Champions League and have barely made it past Zorya from Ukraine to make it to the group stages of Europa League.

Sevilla are undoubtedly the favorites to win this opener and not just because of the home turf advantage. Bet365 gives the Spaniards a line of 1.40 compared to huge odds of 7.85 for Feyenoord and 4.75 for the tie result. Backing Sevilla is a sure bet, although the return is rather small.

Rio Ave may be absolute newcomers to the European Cups scene, but the squad have already shown their ambitions by reaching two domestic cup finals last season. The team had a wonderful start of the season and are tied with three other squads at the top of the Portuguese league. Their Europa League playoffs were pretty dramatic with a stoppage time goal against Elfsborg taking them through for the first time in history.

Dynamo Kiev are of course a force to be reckoned with, having a couple of European titles in the bag already. They enjoy an unbeaten start in their league, but last season’s performance was rather dismal in Europe. However, those who bet on sports in the UK will find it surprising how Dynamo are favored to win this match, possibly leading to some great rewards if punters back the Portuguese squad instead.

Dynamo Kiev got a line of 2.25 to win the game, even though they start their European campaign away. Bet365 gives less favorable 3.20 odds to beat the Ukrainians and the draw will deliver 3.30 payout. Considering the great form of the Portuguese team and the home turf advantage, they seem like a better team to wager on, especially since they odds will deliver a much better payout.

The boys from Monchengladbach boast a rich European football history, with two UEFA Cup wins in the bag and another two final appearances. And then again there’s the famous win over Liverpool in the European Cup final of 1977. And although they are pretty far from those glorious days, it will be reasonable to expect Lucien Favre’s men to put in a decent performance this season, considering that their group-mates include Zurich and Apollon on top of Villareal.

Although it’s too early to tell, Villareal’s performance in La Liga this season is quite decent after three games: 1 win, 1 loss, and 1 draw. And while they have only scored twice in the domestic league, they’ve managed to find the back of the net on seven occasions during the qualifying matches against Astana.

Borussia play at home and will certainly be relying on their fans’ support, Bet365 have included these consideration when giving out odds, valuing the German success at 2.28 odds, while providing Villareal with a line of 3.15 and the draw with 3.40. Both teams are pretty stable so it’s truly anyone’s game, but home turf is home turf and Borussia just might get away with a win.

Both squads have brand new management and both teams are in a bit of a struggle at the start of their respective domestic seasons. Another connecting point is the fact that both teams have failed to qualify for Champions League and have barely made it to Europa League. Celtic, however, had a second chance to make it to the Champions League, but failed to capitalize on that too.

Celtic failed to win a single away game in last three attempts, and Salzburg are in a pretty bad shape themselves suffering two very painful defeats in the home league. We must agree with the experts here, predicting a rather cautious game tonight. Backing 0-0 result with huge 18.00 odds from Bet365 is a true find and could easily lead to some great rewards for smart punters. Otherwise, Salzburg are strong favorites to win with 1.45 odds compared to a huge line of 7.00 for the Scottish success and 4.50 odds for the draw.