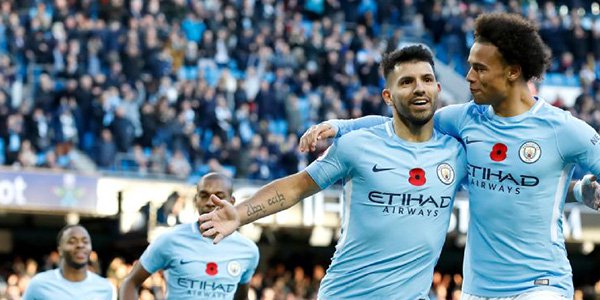 While all the other top European leagues are on hold due to cup ties and the sort, the Premier League is going strong with a full round of games being played over the midweek. This current campaign has showcased some of the most competitive football in recent Premier League history – a total of six big clubs are battling each other for England’s football supremacy.

Manchester City spearhead the table with an impressive 37 points from 13 games so far this season; they’ve won all but one of their matches – a 1:1 draw with Everton way back in August. Their cross-town rivals Man United are right behind them in second position, albeit 8 points behind – a gap wide enough to be a problem for the Reds, but not big enough to allow the Sky Blues to become complacent.

Thanks to Pep Guardiola’s immaculate results at this stage in the competition, Bet365 Sportsbook regards the Etihad side as the favourites for the title 1/10 (1.10), while branding Jose Mourinho’s men as underdogs with odds of 14/1 (15.00). Although Man United have some of the most formidable names in world football, Man City have much greater depth in their squad which might be the winning factor in the long run.

(Make sure to check out our Bet365 Sportsbook review.)

After making history and shocking the world by becoming the Premier League champions in 2016, Leicester City have since then gone back to their normal position in the competition – the middle of the table. They’re currently in 12th spot with only 14 points to their name, and what’s worse is their form at the King Power stadium over the last 5 games: 3 losses, 1 draw and only 1 victory.

That’s why we’re backing Tottenham to clinch a victory here tonight and grab the 3 points that could place them back in the top 4 of the table; Mauricio Pochettino’s men have slipped to 5th after suffering a loss and a draw in the last 2 games. But online sportsbooks in UK are confident Spurs will get the better of the Foxes.

Tottenham attacking duo Harry Kane and Dele Alli have struck a potent partnership this season in the English top flight, finding the back of the net a combined 12 times. And we’re doubtful Leicester’s defence will be able to cope with their prowess in front of goal.

Goodison Park will stage a match of uncertainty tomorrow evening, as their game against West Ham could easily go either way. Both clubs have just recently sacked their managers – Ronald Koeman and Slaven Bilic respectfully – which puts them in a precarious position. Online betting sites in UK favour the home side to seal a win, but realistically speaking their dire record isn’t very convincing.

The Toffees have lost 3 times and won only twice in their last 5 games at home, while the Hammers on the other hand have suffered 2 losses and drawn on 3 occasions while playing on the road. On top of that, West Ham find themselves in the relegation zone in 18th position with only 10 points, while Everton are not too far ahead, in 16th spot with a meagre 12 points.

Normally we’d have gone with the home team for a game like this, but judging by each of the side’s performances from 13 games in the Premier League so far, we would wager on a draw with goals.