Fed up with Washington and Wall Street, James Hinton Goes from Playing Poker to Playing Politics 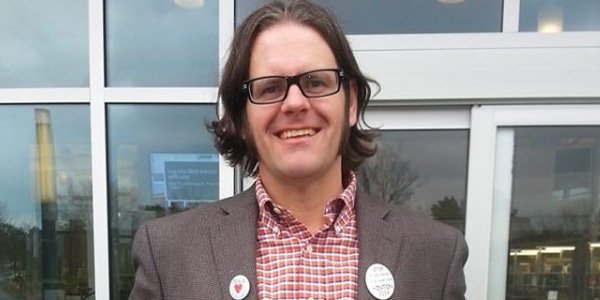 Like many Americans, James Hinton is fed up with Wall Street and the corrupt Washington establishment. Rather than passively complain, he decided to be proactive and do something about it.

James Hinton of Napa, California has made a major splash on the political scene. The former professional poker player is making a run at the US Congress, challenging 16-year veteran Mike Thompson for the District-5 congressional seat.

Hinton is an upstart, independent candidate looking to shake up “business as usual” in Washington. Never too busy to talk with constituents and members of the media, he was kind enough to sit down with us and share some thoughts on his background, beliefs and political program as a congressional candidate.

The upstart looking to shake up the establishment

Mr. Hinton is certainly not a member of the Washington establishment and its allies, the East Coast intellectual and financial elite. He’s a gritty everyman, unafraid of making off-the-cuff statements and putting his money where his mouth is. The son of a Vietnam veteran, Hinton was raised to believe that America’s greatness lie in people, not power.

• Hinton: “I will support the Wall-Mart clerk, not the Wall Street jerk.”

When the two of us sat down, Hinton voiced his populist message loud and clear: “Restore democracy. I will represent our community. The voters. Not the super PACs. Not the Banks. I’ll represent the Wall-Mart clerk instead of the Wall Street Jerk…Protect the Bill of Rights. Decriminalize Cannabis. Tax Wall St.”

He’s chosen to blaze a trail from Napa to Washington as an independent, viewing both major parties as out-of-touch elites polluted by corporate cash. Whereas Mike Thompson has $1.6 million of party campaign funds at his disposal, Hinton has kicked in $1,000 of his own money.

I asked him if he thought his non-political background and independent status gave him an advantage in the current race. He responded with an enthusiastic “Yes!…Do you want the same old sack lunch you’ve been getting for the last 8 terms/16 years, it is getting kind of stale and expensive or do you want something fresh?”

Hinton played online poker professionally until “Black Friday” in 2011, when the US indicted the operators of PokerStars, Full Tilt Poker and Cereus for violating the Unlawful Internet Gambling Enforcement Act, an incident with many considered to be an overreach on the part of government.

When I asked Mr. Hinton to share how Black Friday affected him personally, his answer surprised me. He saw it as an example of the federal government representing wealthy, powerful interests in America at the expense of common people. Not only did the incident have a profound effect on him, it first inspired him to pursue a political career:

I went from reigning MVP of the PokerStars All Star Challenge to “WTF just happened?” It was then I realized our rights were being taken. I decided if they won’t let me play poker, I’ll play politics. Let’s see if Wall Street can beat me in Congress. I’m sick of seeing our representatives getting bullied and bluffed by the Lobbyist.

Views on other issues

While he didn’t offer an opinion as to whether California should become the third state to legalize online casinos in America, he did express support for licensed sportsbetting (California is currently barred by the federal government from hosting any forms of betting).

In addition to supporting legal online poker and betting, Mr. Hinton is a vocal advocate of marijuana legalization. He sees it as a matter of protecting personal freedom, improving public health and reducing government debt: “people who think of Marijuana as taboo are uneducated and driven by fear mongering…Cannabis is not toxic, however many status quo alternatives are extremely toxic. Realize it’s time to legalize.”

Hinton takes a populist, main street approach to taxation as well. While recognizing that both the State of California and the federal government are heavily indebted, he favors a tax system that would ease pressure on working people and shift the burden onto Wall Street. As America’s financial elite benefit the most from the economic system, they should contribute more to its upkeep.

Last, but not least, the aspiring politician is a committed environmentalist, viewing himself as both a champion of our communities and the natural environment which sustains them: “We have this glorious land, an Eden that can sustain all of us in abundance if stop polluting it, and starting respecting its life-giving properties.”

Only time will tell if James Hinton unseats Mike Thompson to win the district, let alone make a significant difference in Washington. But one thing is for sure; he offers a fresh, honest approach to politics that is in short supply these days.

Let’s hope that voters take notice and reward him for his honest efforts to change things for the better. Even if one doesn’t agree with his political program, it’s hard to find fault with what he represents: the decent, hard-working people of America taking control of their lives and communities, rather than leaving things up to hedge fund managers, lobbyists and out-of-touch Washington elites.