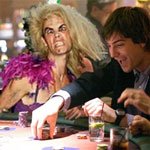 Didier Jambert, a 51-year old from Nantes, France is now testing French gambling law by bringing a £400,000 lawsuit against the colossal GlaxoSmithKline pharmaceutical firm for selling a “defective drug”. Jambert was an allegedly normal father of two until the dopamine agonist ReQuip, a drug he took for his Parkinson disease, transformed him into both a gambling addict and a transvestite homosexual sex addict. Moreover, his compulsive gambling forced him to waste his family savings and even to steal from his family to pay for his habit.

Once a respected town councilor, the drug “side-effects” began in 2003, when, as he confessed, “…started seeking out sex with men and exhibiting myself on the internet. Those around me could not understand what was going on.” His symptoms became more severe as his prescribed dose increased. At one point, he began to sell his children’s toys and games to pay for his internet gambling in France.

Jambert’s behavior returned to normal in 2005 when he stopped taking the ReQuip. While he survived eight suicide attempts and his marriage pulled through the ordeal, his family are now considered “pariahs”. Jambert laments, “My life was ruined, my family and I were treated like we had the plague.”

While the undesirable side effects of Requip have been known for many years, warnings were only placed on the package starting in 2006. GlaxoSmithKline’s lawyer Jacques-Antoine Robert declared that when Jambert took the drug, scientific knowledge did not give “any indication of the (undesirable) effects of Ropinirole”, a particle in the dopamine agonists. While Robert conceded there was a chance of an “extremely rare reaction”, he claims the evidence is insufficient to prove a causal relationship and further technical documentation is required.

In a comparable case, an Italian Parkinson patient is suing his doctor for a $514K gambling spree. Paolo Chisci, the Italian was also taking a dopamine agonist, but his drugs were manufactured by Boeringher Ingelheim and Eli Lilly, who have been summed to Chisci’s court case as witnesses. It isn’t known why Chisci is suing his doctor instead of a pharmaceutical company or whether he is among those who contacted CADUS.