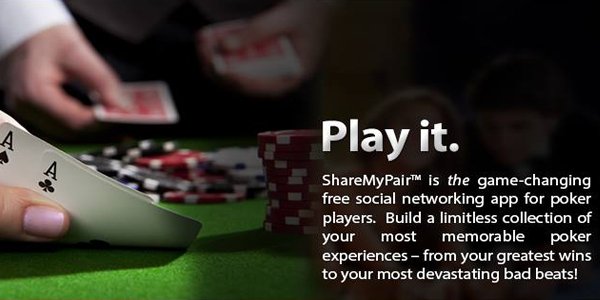 Share My Pair continues to revolutionize the poker content industry, and its creators are constantly keeping the app fresh and on the cutting edge.

The brainchild of poker innovators Steve Miller and Rich Sondheimer, Share My Pair is a groundbreaking social media app that has been front-page gambling news throughout 2014. The two have long been avid poker players and followers of poker content both online and on television.

Share My Pair represents a radical approach to content, recognizing the fact that all amateur and pro poker players are consumers of content, but few are creators of it. Why not allow players to create and share their own content in real time, rather than rely on second-hand accounts? That’s exactly what Share My Pair does.

Having been enthusiastically called the “Facebook of poker,” the app asks you to enter information regarding the last hand you played, then creates a short animated video replaying that hand. It’s a simple but surprisingly sophisticated app that gives the player almost 100% control over the content.

Share My Pair is a fun social app that allows users to share poker stories with their buddies, but it’s also a fantastic training tool useful for everyone from beginners to seasoned pros. When someone posts a hand using the app they can receive feedback from other players, and the app also has a forum where users can share thoughts and opinions. Miller is adamant about the fact that is has helped his own poker game immensely.

• The app is available for download on iOS and Android devices

Miller first shared details about the app itself in an interview with me last May. This week he was kind enough to sit down with me for a second time and fill me in recent updates to the app as well as endorsement agreements, all while musing on the ways in which Share My Pair continues to revolutionize the world of poker content.

New happenings in the world of Share My Pair

Miller and Sondheimer’s company is called Card Shark Media. Rather than dilute their creative genius on a multitude of products and projects, the two have decided that Share MyPair is Card Shark’s one and only operation. That gives them time to focus on tweaking and improving the app; in the words of Miller, “we’re constantly improving so the product never gets stale.”

What kind of improvements are we talking about? For starters, Share My Pair now has a feature which allows the user to describe the other players as well as narrate their hand. Users “label” other players by selecting commonly-used poker lingo from a drop-down menu.

The app also has a new function that makes it easier for users to post multiple hands at the same table. In fact, Share My Pair is improving so quickly that the only downside seems to be that it’s only available for iOS and Android devices.

Other exciting developments surrounding the company include an ever-expanding number of celebrity pros endorsing the product. When I spoke with Miller several months ago Phil Helmuth Jr. and Greg Raymer were on board; now Share My Pair is being enthusiastically promoted by a slew of players including FarazJaka, Jonathan Little, Bernard Lee and Brian Hastings.

Not only do these pros promote Share My Pair, they also use it. In the words of Miller, using the app gives users “one-on-one contact with the pros.”

Without question the most engaging part of the interview was when Miller offered me a window into his approach to content creation. We discussed “user-generated content” the first time we spoke, but this time he discussed his philosophy in much greater detail.

Miller told me that he first became interested in covering live tournaments as well as online poker sites in America and elsewhere during the mid-2000s. “I had the idea of running syndicated poker results in newspapers across the US. The only problem was, that was just as print media was beginning to decline.”

With the content market awash in an-ever growing stream of low-cost web content, the traditional model of licensed live tournament reporting and high-cost written content was fading, and fast. The growth of web content meant that reporters and writers were fighting an increasingly fierce battle over a pie that got a lot smaller after Black Friday in 2010. In Miller’s words:

The industry needed a new model that could produce original content at almost zero marginal cost. The aim of user-generated model is to create low-cost content that players will share themselves… We believe that we (meaning Share My Pair) are that economic model.

Share My Pair truly is that model. By giving players the power to be active creators rather than passive consumers of content, the user-generated revolution is bringing good tidings to everyone involved. Users are happy, and hosting the app means that poker leagues and affiliate-financed content providers have original, meaningful content at almost no cost.

It’s a win-win for everyone, but especially for the users of Share My Pair. The app is getting better each day and remains free to download. And that is something that Steve Miller assured me will not change.