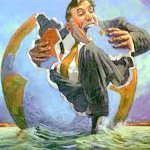 Recent Portugal gambling news has revealed that Bwin, one of the largest and most popular sportsbooks in the world, is refusing to stand down in a €27 million claim by the Portuguese gambling monopoly, and is intent on fighting the suit, all the way.

Santa Casa de Misericordia de Lisboa recently won a court of appeals victory over the online sportsbook company, and in defeat, Bwin obliged them by removing all Portuguese advertising and sponsorship from their online site. The Portuguese gambling monopoly however, insists it is far from finished with Bwin, and has now lodged a suit for €27m and interest in restitution, from the company.

The seemingly greedy move by Santa Casa de Misericoria de Lisboa has prompted an angry reaction from online favourite Bwin, who have vowed to fight the Portuguese gambling monopoly all the way, by receiving a reversal of the decision, at the Court of Second Instance, also in Portugal.

In an even glutinous move, the Portuguese gambling monopoly, has gone one step further, by implementing the decision awarded to them by the Porto Tribunal da Relação, to file charges against at least another thirty other gambling companies, including the world renowned BetClic. It is likely that there are no online sportsbooks in Portugal that are safe from such a charge.

This isn’t the first time that the Santa Casa de Misericordia de Lisboa have been in the news though. The recently proposed changes to Portuguese gambling laws have seen legislation for the legalization and regulation of the Portuguese gambling industry appear.

It is believed that the industry itself is worth over €600m to Portugal, and that the legalization of online gambling would help assist a country with a severely damaged economy of late. There have also been scrupulous and dubious reports in the Portuguese press too, of changes in the wind.

One such report details that “someone” connected with the Ministry of Economy may have come across some sensitive material in the form of a internal government document. This person allegedly states that Prime Minister Pedro Passos Coelhos plans to use the revenue from online gambling, to fill the €478m social security deficit he is currently facing.

Just how he hoped to accumulate roughly €250m in tax revenues, what they would be comprised of, and which online games would be considered okay for inclusion, has not however been mentioned. Lending more incredulity to the reports.

Bwin at present still allows customers to bet on sports within Portugal, as there is no law prohibiting such a move. But for the smaller sports clubs who relied on sponsorship deals with the gigantic online sportsbook, life in Portugal, could become very grim indeed.