Japanese Government Cracking Down on Gambling

Japanese got a new way to gamble called compu gacha which resembles online slots and comes with rewarding bonuses. 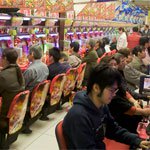 Due to restricted betting options under Japanese gambling laws, there are clandestine methods of gambling for money.

One method is playing pachinko games and then selling the balls won for money at illicit shops. The other way is to play a variety of games such as online slots, blackjack, poker, and baccarat at online casinos in Japan. Usually, these are foreign-licensed sites that cater to the Japanese gamblers.

Since gaming innovation doesn’t stop, there is a new way to bypass the gambling regulations in Japan. The so-called compu gacha game involves players depositing money to get a complete set of random computer-generated scatters, which act as if it was an online slot game. If the player succeeds, a handsome bonus prizes are awarded.

As a result of many complaints, the Japanese government is investigating this form of gaming. Moreover, multiple social sites which offer ways to play online poker in Japan are also under regulatory scrutiny.

The Japanese regulators find it harder and harder to control gambling in Japan with arrival of new technologies such as mobile casinos in Japan, which are beyond the jurisdiction since these are based abroad.

The fact remains that the Japanese are avid players and like to bet for money. The huge pachinko industry shows that, but the authorities dare not to touch it as it would attack too many interests and even weaken the government. The newer online versions of pachinko, however, come under regulatory pressures, which is all fine with pachinko parlor operators as they worry about the loss of business to the Internet wagering.