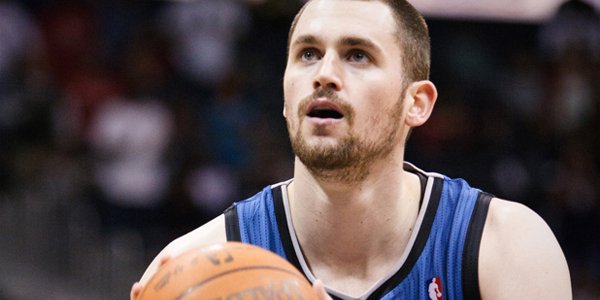 L.A. Lakers are favorites to trade for Kevin Love, ahead of the NBA Draft in June this year.

NBA draft lottery is coming up on May 20th. It’s an annual event allowing the teams that missed the playoffs in the previous season or the teams holding the draft rights belonging to another team missing the playoffs to take part in a lottery process determining the NBA Draft order. The main NBA Draft is scheduled for June 26th this year.

Naturally, besides all the speculations and drama leading up to the lottery draft, there’s lots of betting happening at land-based and online sportsbooks in the United States. Punters wager on a variety of outcomes mostly connected with which player ends up in which team.

NBA lottery draft is coming up with lots of betting option

• Biggest story is where Kevin Love will end up

• Four teams in the running for Kevin Love

This year there are a couple of interesting stories unfolding before the draft lottery. Kevin Love has already told the Minnesota Timberwolves that he desired to be an unrestricted free agent for next year. This means he’s not seeking for an extension of his Minnesota contract, allowing him to become a potential trade for the season.

This is certainly good news for punters wagering on NBA lottery draft under American gambling laws. There are several teams in the running for the player now, including Chicago Bulls, Los Angeles Lakers, New York Knicks, and Golden State Warriors.

These four teams are the only ones under the projected salary cap this offseason. It means that the potential trade for Love will give the Timberwolves a salary-cap relief without trading back equal salaries.

Why Lakers are an interesting trade partner for Love

What makes Los Angeles Lakes a more interesting trade partner for Timberwolves is the fact that they’ve got a No. 6 lottery pick, and a 21.5 percent possibility of moving into the Top 3. The other three teams in the running for Kevin Love don’t have any draft picks from the current top 12.

Those who wish to bet on sports in Greece and on the NBA draft lottery in particular, should know that L.A. Lakers have only $34.1 million in guaranteed salary for next season. That money will go to Kobe Bryant, Steve Nash and Robert Sacre. The overall salary cap for next season is expected to be $63.2 million, so Lakers have a little bit to spare.

This means that Lakers can trade for Love simply by offering their lottery pick, which makes them a top favorite to sign Kevin.

As for the NBA draft lottery chances, L.A. Lakers have a 6.3 percent chance of winning it and getting the No. 1 pick. Their Top 3 chances are at 21.5 percent. In the event they do get a Top 3 pick, they will most likely be choosing between Andrew Wiggins, Joel Embiid, Jabari Parker, Dante Exum and Julius Randle, on top of Kevin Love that is.

L.A. Lakers have a very short window to win the NBA. Kobe Bryant has only two years left on his contract and is nearing the end of his career anyhow. And even in case the likes of Embiid, Exum, Randle, Wiggins, or Parker make an immediate good effect on Lakers’ performance, trading for Kevin Love would still provide Los Angeles with an advantage to win right away.

Naturally, should Love stay as good as he was in the upcoming season, he would only be compared to the likes of LeBron James, giving Lakers a huge advantage should they sign him.