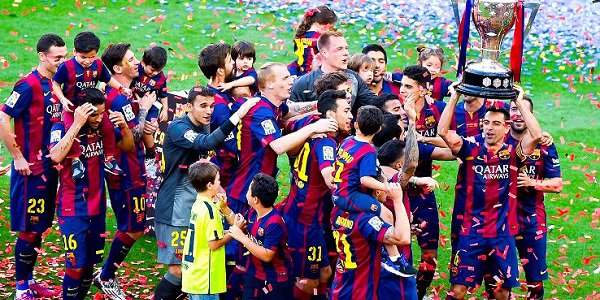 Real Madrid will soon make up for their postponed match against Celta Vigo. A win for the Galacticos would put Barcelona in a really difficult position.

Barcelona have played 37 league games this season and based on the number of points they have collected, online betting news in Spain keep guessing: can Barca win La Liga this season, or have they lost it already without even being willing to realize and admit the inevitable? Let’s take a look at the facts as well as the La Liga outright winner odds.

Based on these latter ones, we can make goof enough La Liga betting predictions about the chances for the end of this season. Barcelona are the only remaining challenger for Los Blancos but the Catalans are on thin ice as well. Their destiny is not in their in hands, it’s in the hands of Celta Vigo and Malaga. Or, more importantly, in the hands of Zinedine Zidane and his men.

What are the odds for Barcelona to win La Liga?

If you want to bet on Barcelona winning La Liga in Spain because you think that Barca can win La Liga this season, you should visit online spotsbooks like Bet365 or Bwin. They offer 5.00 (4/1) odds for Barcelona to win La Liga at the above mentioned sports betting sites.

They will need a lot of luck to be able to call themselves champions at the end of the season. First thing Luis Enrique’s men will need to do is winning their last game against Eibar. They will play on Sunday night at Camp Nou. La Liga betting predictions expect an easy win for Barca for that game. However, that might not be enough for them…

Real Madrid and Barcelona have both collected 87 points until now. However, Los Merengues reached this number in 36 games, while the Blaugrana, in 37. That gives Zidane’s men a huge advantage, which they might take advantage of as of tomorrow night, when they face Celta Vigo. Winning that match would give an incredible boost to Real Madrid’s chances to win La Liga.

Not like the odds for Real Madrid to win La Liga would be too bad at online sportsbooks in Spain at the moment: The highest odds online for Real winning La Liga can be found at BetVictor: 1.20 (1/5). Not to mention the fact that winning against Celta Vigo would mean even better chances for Real Madrid to finally win La Liga again after 2012. However, let’s not forget the fact how Celta knocked Real out of the Copa del Rey earlier this year.

Yet, the odds are in favour of Los Blancos and their success. The odds for Real Madrid to beat Celta Vigo tomorrow night are as low as 1.22 (2/9) at Betfair. Can Barca still win La Liga? Their chances are not the best, but you know, nothing is impossible. Should the Royal Club think just for one second that they already have it, they might even get beaten by Celta or Malaga. And a loss would be too much of a price for the Whites.