Maradona does not believe in Sabella, despite Argentina being second favorites for the World Cup 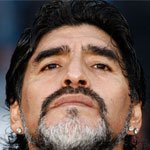 Argentinean legend Diego Maradona has launched an attack against Alejandro Sabella and the Argentine national football team as he feels their chances of winning the World Cup are diminishing.

Despite online sportsbooks in Argentina showing the national side as second favorites, Maradona believes the style of play under Sabella is harming their chances, saying: “I do not believe in the man who directs the side.”

Complex Argentinean gambling laws mean that punters can have a hard time finding good odds online. With foreign based websites currently banned across the country, gamblers have to rely on local sportsbooks. The situation is far better than in neighboring country Brazil, however.

With their home World Cup fast approaching, online casinos in Brazil are still illegal, as well as online sportsbooks. However, despite government plans to clamp down on foreign sites, punters can still use them to bet, meaning fans hoping for a Brazil v Argentina football showdown will be able to place their bets from the comfort of their home.

Back in Argentina and Maradona’s comments are unlikely to provoke a response from the current manager of the national team. With Maradona laying the blame for Argentina’s 2010 World Cup loss to Germany firmly at the feet of his players, this could be seen as another “I’m better than you” comment from one of the world’s most outspoken former players.

Whatever happens, Argentina are likely to be a major draw at the next world cup and with mobile betting really taking off, it couldn’t be easier to have a flutter on the outcome in game. As the World Cup approaches and odds start to appear, it will be interesting to see what trends start to appear in the world of Argentinean and South American football. With the World Cup in neighboring Brazil, a South American winner is likely, after all.