NBA vs. EuroLeague Betting: Which has Better Odds? 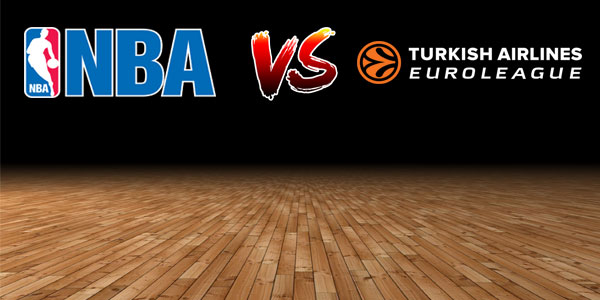 Both the NBA and EuroLeague are now both deep into their 2016/17 season, and basketball fans around the world are busy placing their bets on who wins the respective championships. There are some great odds offered for both leagues at the moment, so let’s take a look at the betting favorites.

The 2016/17 EuroLeague season kicked off in October of 2016, and is set to conclude on May 21st. It’s been an exciting year in EuroLeague basketball, and many teams are now predicted to be the champs.

At the top of the EuroLeague betting favorites is CSKA Moscow, who have played tremendous this season with 19 wins and just 6 losses. CSKA is considered to be one of the best teams in European basketball history, and have made the EuroLeague Final Four 13 times already in the 21st century. There are still a number of games left this season, but CSKA Moscow is a great bet on the EuroLeague champion with current odds of 2.60, according to NetBet Sportsbook.

In many ways, Real Madrid is the Cleveland Cavaliers in terms of NBA vs. EuroLeague betting odds. Not many people deny they are likely the second best team in the league at the moment. They have played CSKA twice already this season, winning one and losing the other. Real Madrid has a great shot of winning the championship this season with odds of 3.50.

The last EuroLeague betting option we’ll look at is Fenerbahce Ulker. The Istanbul-based team was the EuroLeague runner-up in 2015/16, and have continued on that momentum with 16 wins this season including a win over Real Madrid and two over CSKA Moscow. Fenerbahce winning this season may be one the best EuroLeague bets in 2017, as they have some tremendous odds to make money at 4.00

In a sense, the 2016/17 NBA season feels like a repeat of last season. The Golden State Warriors have continued to display their dominance in the west with 52 wins and just 12 losses, while the Cleveland Cavaliers prove they’re the best in the east, winning 42 games and losing 21. The NBA vs. EuroLeague betting odds are similar here, as there are just a few teams that most online sportsbooks in the UK predict have a real shot of winning the championship this year.

In early March, Kevin Durant suffered an MLC injury that some NBA betting experts felt could affect the Warriors’ odds to win the NBA Championship. Based on recent performances, there could be some truth to this. They’ve gone 2-2 since Durant’s injury, most recently losing to the Boston Celtics. No timetable is set for Durant’s return, but the Warriors are still the betting favorites to win the NBA Championship this year with odds of 1.74, according to NetBet Sportsbook.

As we mentioned before, the Cleveland Cavaliers are still the top team in the Eastern Conference. Lebron James has shown no signs of slowing down, while younger players like Kevin Love and Tristin Thompson are expected to be the team’s future stars. Don’t be surprised to see another Warriors vs. Cavaliers final this year. The Cav’s odds to win the NBA Championship are set at 3.60 this year.

Upon further inspection, it becomes clear that there’s some major similarities in the NBA vs. EuroLeague betting odds. Both leagues have some top teams expected to win the championship, as well as some promising underdogs that can make UK gambling news with a win.

Which league do you think wins in a battle of NBA vs. EuroLeague betting options? Who do you feel will win the championships in both? Tell us what you think by leaving a comment below, and make sure to check out NetBet Sportsbook for a full list of 2017 basketball betting odds!