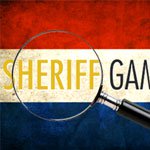 Four men have been arrested in the Netherlands in connection to a money laundering probe looking into EUR 110 million worth of illegal earnings. It could turn out, however, to be a big piece of gambling news, as Bubble Group CEO Stijn Flapper has been implicated. Bubble Group are the parent company of Sheriff Gaming.

The mobile casino games company have acknowledged Flapper’s involvement, but deny any wrongdoing on their part in a statement released on their website.

“We are convinced the suspicions do not relate to Bubble Group and remain confident about a good outcome; our business is the honest business of creating cutting edge 3D games whilst our activities have nothing to do at all with money laundering activities whatsoever.”

The accused – Flapper, brothers Michel and Maurice Gregoire, and an as yet unnamed 60 year old – have not only broken financial rules, but very strict Dutch gambling laws, too. They are estimated to have benefited to the sum of between EUR 30 and 50 million.

Despite their protestations, this news could hurt Sheriff Gaming, who have been looking to advance in recent times as a major developer of mobile casino games. Focusing on their mobile slots catalogue, the company have expanded their reach in recent times, with a host of new titles joining their online portfolio.

This news comes soon after another 4 Dutch men were arrested over stealing more than EUR 1 million using malware, laundering the cash with virtual currency Bitcoins. This major piece of international news shook the world of bitcoins, especially considering their surge in popularity in recent times.