Of all America's games, football represents the lion's share in bets made and money wagered. In fact, whether on the college 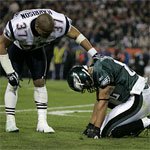 Of all America’s games, football represents the lion’s share in bets made and money wagered. In fact, whether on the college or professional level, the act of gambling on football in inextricably tied in with the game itself.

Whether consciously or not, the weekdays leading up to the games are filled with dialogue focused on NFL betting lines, as favorites and underdogs, pointspreads and over/unders are endlessly discussed. Game lines are presented in the newspaper as a matter of course and football pools are nearly traditional in American workplaces, making football really the sole American sport in which the average fan is aware of the bookmakers’ forecast on the game’s outcome.

And yet, no sports organization – not the squeaky-clean NBA with its referees recently alleged to have participated in insider information nor the MLB which suspends gamblers from its playing fields for life – is so virulently opposed to gambling on sports in America and especially to internet sports betting.

The history of the NFL’s not-so-private war on internet gambling began in about 1999, when the league started bringing lawsuits against sportsbook websites which were using the NFL logo or team insignias. They were mostly successful in these trademark infringement cases, typically getting a “cease and desist” order awarded.

Most obviously affecting the American online gambling market these days of course is the Unlawful Internet Gambling Enforcement Act of 2006. UIGEA was not only heavily lobbied for by NFL interests (as well as horseracing powers), but also provides special provisions for gambling on football – under the auspices of the NFL, of course. In March 2009, NFL’s newly appointed in-house lobbyist Jeff Miller stated specifically that he would seek to preserve this ban on internet gambling in the United States at all costs.

Gambling on NFL and NCAA football games continues, with an estimated $1.5 billion wagered annually – including about 50% of that in online gambling – of which neither government or NFL interests get a penny. You would think the ever money-conscious NFL would seek to cash in on this bond between football and gambling, but the stubborn league shows no signs of changing.