Now’s the Time to Bet on Bernard Hopkins vs. Joe Smith Jr.

News >Now’s the Time to Bet on Bernard Hopkins vs. Joe Smith Jr. 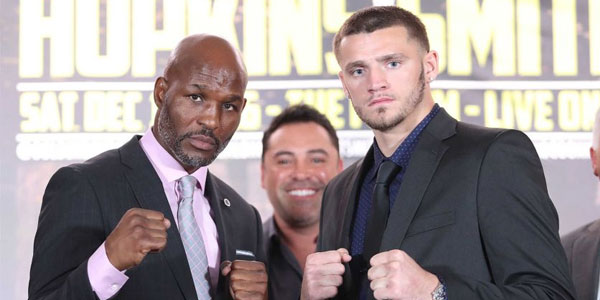 A future hall of famer will step into the ring for the last time tomorrow night, and now is the best time to bet on Bernard Hopkins vs. Joe Smith Jr. with NetBet Sportsbook.

The word legend gets thrown around a lot in boxing, but there’s no denying the fact that Bernard Hopkins is a living legend. In 2011, Hopkins became the oldest man to ever win a major boxing world title, and this Friday he will look to extend his own record by winning the WBC International light heavyweight title.

Hopkins first began his career in 1988. After losing his first fight by majority decision, he rattled off 22 straight fights to earn a shot at the IBF middleweight title opposite Roy Jones Jr. That fight came a little too soon for Hopkins, who lost a clear unanimous decision to the champ.

It took just four more wins for Bernard Hopkins to earn another title shot, but this time the fight ended in a split draw. The rematch was quickly scheduled, and Bernard finally took full advantage, winning the title with a 7th-round TKO.

More than a decade later, Hopkins is still fighting for major titles, and at nearly 52 years of age has a chance to make UK gambling news by winning the WBC International light heavyweight title. Now, NetBet Sportsbook is allowing their members to bet on Bernard Hopkins in his last fight.

Who is Bernard Hopkins fighting?

Standing across the ring from Hopkins tomorrow night will be Joe Smith Jr. The 27 year old from Long Island, New York has accumulated a record of 22-1 and been nicknamed the “Irish Bomber” due to his impressive number of stoppage victories.

Smith Jr. is not nearly as experienced as Hopkins, but he will have the considerable youth advantage in this contest. A win over the legendary Hopkins would be the biggest of Smith’s career, and could earn him a shot at some of the top light heavyweights in the sport such as Sergey Kovalev and Andre Ward.

As we mentioned before, both these men are in completely different parts of their career. Hopkins will be looking to end his run as a boxer on a high note with a championship belt, while Smith Jr. looks to steal the thunder from one of boxing’s most respected names. The Hopkins vs. Smith Jr. betting lines are already set, so let’s take a look at the favorite.

You can bet on Bernard Hopkins coming into this fight with everything he has. He showed against Sergey Kovalev that he can’t quite hang with the top fighters at light heavyweight, but never got finished in that bout. Hopkins’ experience is almost unparalleled at this point, and he still possesses one of the most skilled defenses in the game. Despite the massive discrepancies in age, Hopkins is still the betting favorite according to most online sportsbooks in the UK with odds of 1.50.

Joe Smith Jr. still has a lot to prove in his career, yet he continues to thrive when he’s the betting underdog. The New York native has plenty of time to grow in his career, and will be looking for the stoppage victory against Hopkins. Joe Smith Jr’s odds to win are currently set at 2.45.

Are you planning to bet on Bernard Hopkins vs. Joe Smith Jr? Will the boxing legend retire with a championship belt? Tell us what you think by leaving a comment below, and make sure to check out NetBet Sportsbook for a full list of upcoming boxing betting odds!