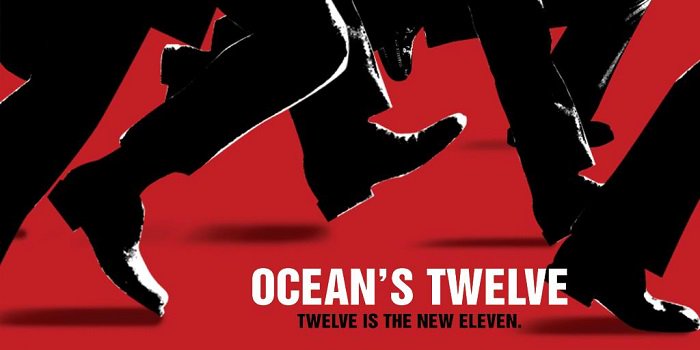 At the end of Ocean’s Eleven, we left off with Rusty, Tess and Danny Ocean leaving the penitentiary with Tony Benedict’s men not too far behind. Steven Soderbergh’s original attempt at this sequel was more than competent considering he was without an original 40-year old version to use as a guideline.

More importantly, we see a more daring script by George Nolfi which allows the characters greater room and empowerment to express their unique personalities.

Added to the incredible cast of George Clooney, Brad Pitt, Bernie Mac, Matt Damon, Andy Garcia, Don Cheadle and Julia Roberts is Catherine Zeta Jones and Vincent Cassel. The addition of these performances doesn’t in any way distract from the overall chemistry of the cast. The plot in Ocean’s 12 isn’t as confined as its prequel which had to correlate characters within a precise preparation and execution of a heist. The film, making USD 362 million at the box office made US gambling news.

Benedict finds Ocean’s 11 and gives them an ultimatum

The insurance money is not enough for the irate Benedict, he wants revenge

The film begins with a brief scene in which Rusty is living with his current girlfriend Isabel Lahiri, a detective that specialized in burglary. Upon hearing her reveal the details of an investigation that could lead her to his role in the Benedict heist, Rusty exits quietly exits the flat. Casino mogul Terry Benedict finds all 10 members responsible for stealing his money and gives them a deadline to return his money.

Estimated to be at least USD 160 million plus USD 38 million interest, the group decides to go to Amsterdam to plan another heist. Linus approaches Rusty and asks for a larger role in the negotiations with the informant called Matsui. Once the meeting commences, Rusty and Ocean start to talk in an underworld jargon that seems utterly incomprehensible to Linus. After a weak attempt to have input, Rusty and Ocean continue to fool Linus, as they find the info needed.

Twelve is the new eleven

Martin Vanderbough, an antique dealer who is locked away in his well secured home which contains the first stock certificate by the Dutch East India Exchange. The small USD 1.2 million the certificate is worth is small but more lucrative than using a mobile casino. The plan to cause a small level explosion that lifts the house enough to secure a wire so that entry and exit into the house can be made through the second floor window.

After two months preparation, the group is able to enter the house, but after bypassing security and opening the vault, they find that the stock certificate has already been stolen and replaced with an invitation letter sent by “The Night Fox.” After the infiltration of the house, Isabel is contact at Interpol to investigate. Once she remembers giving Rusty the information about the technique used to lift the building, Isabel knows that Ocean and his group were behind the attempted heist.

The Night Fox drops a challenge to Ocean

After looking into sources, Ocean finds out the “Night Fox” is a master thief by the name of Baron Francois Toulour, a wealthy businessman who paid Matsui to give lead Ocean to the Amsterdam job. Toulour, who was trained by Gaspar LeMarc, witnessed a meeting in which an American businessman who told him about the Benedict Heist. Upon hearing how grand the job was and how Ocean was the greatest thief, Le Marc was forced to not call his protégé Toulour the best thief in the world.

Toulour, who felt slighted, was led to challenge Ocean to see who could successfully steal the Faberge Imperial Coronation Egg. Once Ocean learns that Toulour would repay his debt to Benedict if he won, he accepts the challenge. Such a contest would be tempting for any punter using online sportsbooks in the US. The train will carry the egg and Ocean and his crew will have 48 hours to steal the egg.

Forming a well-timed plan to steal the egg and replace it with a holographic copy, Isabel finds the information through the mobile phone she stole from Rusty. Knowing about the copy, Isabel forges documents and sets up an arrest of Ocean and half the crew before the heist begins. Using Tess, she pretends to be a pregnant Julia Roberts to get close to the egg. Unfortunately she is thwarted by actor Bruce Willis as he shows concern for her baby.

Saul tries to help by pretending to be Tess’s doctor, but before they can come into contact with the egg, Isabel captures the rest of the crew. As the group is taken into custody to be extradited, Linus’ mother, a master con artist, arranges for their release. After they are released, Ocean and Tess visit Toulour to watch him gloat over his victory. Toulour explains how he climbed the museum, entered through the top, used capoeira to get through the laser field and reach the egg.

After Toulour explains the story, Ocean asks for the money and Toulour realizes that his mentor LeMarc helped Ocean steal the actual egg and his was a fake. Rusty reunites Isabel with her father, who is in fact LeMarc. Ruben gives a check to Benedict for what is owed to him as Toulour observes in the background. The film concludes with Ocean’s crew meeting to celebrate their liberation from Benedict.

This advertisement masquerading as a highly inaccurate review is both entertaining, incoherent, and arguably a reflection of the steaming hot mess that is the world as of the date of this article (pre-Trump and pre-pandemic). Perhaps also a reflection of what is to come.