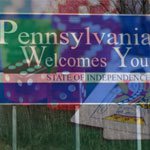 Already the home of 11 brick-and-mortar gambling establishments and another casino resort opening later this year, Pennsylvania looks ready to take the next step towards a full fledged gambling industry by legalizing it online.

The move is motivated in no small part by the competitive pressure coming from neighboring New Jersey and Delaware, which have already laid the legal foundations to be among the states that can host online poker sites in the US.

This, in turn, was in no small part motivated by the revenue drain caused by Pennsylvania’s booming land based casino industry. “These states have seen their gaming industry take a hit from Pennsylvania’s casinos, with our state becoming the second largest gambling market in the country,” wrote State Rep. Tina M. Davis (D), the proposal’s main sponsor. In fact, the bill has bipartisan support.

The Keystone State’s very own Governor, Tom Corbett played a crucial part in derailing efforts to alter American gambling laws on a federal level. As the Chair of the National Governors Association, he criticized such proposals to regulate online poker “as an unnecessary preemption of state authority.”

As the reality of American internet casino starts look more and more imminent, that state authority is being used increasingly across the country: states with a developed gambling scene are making efforts to protect the revenue generation – and thus taxpaying – potential of their industries from federal restrictions and interstate competition.

As Rep. Davis argues, “it is imperative that we maintain the integrity of our gaming industry amid inevitable federal preemption and competing states […]. A responsible internet gaming system must be created in order to protect Pennsylvanians and the success of the established gaming industry in the Commonwealth.”

Being the 6th most populous US state, with nearly 13 million inhabitants, Pennsylvania would likely possess sufficient player liquidity to sustain an online gambling industry, while also being able to benefit from interstate compacts.