Place Your Bet on the NFL Draft This Year with Intertops 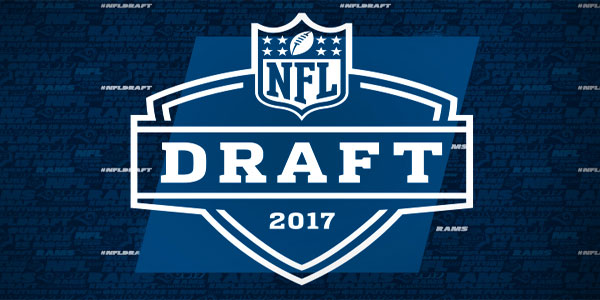 One of the more exciting times sports will begin today, and Intertops members have a wide range of options to bet on the NFL draft!

The 2017 NFL draft will officially begin on April 27th. NHL fans around the world are busy making predictions on which players will make the cut, but not everyone knows you can actually bet on the outcomes. In this article we’ll take a look at a few of the options to bet on the NFL draft in 2017.

Perhaps the most exciting aspect of the NFL draft is trying to guess who will be drafted first. The player who earns this distinction tends to do great things in the NFL. There are some incredible odds available right now, so let’s look at some of the betting favorites.

The top favorite is Myles Garrett. This 21 year old defensive end played in 3 bowl games while attending Texas A&M and was named first-team All-American in both 2015 and 2016. Garrett is considered to be one of the best athletes in the draft this year, and is the betting favorite to be picked first with odds of 1.07.

Mitch Trubinsky is another fantastic NFL draft betting option. As quarterback for North Carolina, he helped his team reach 4 different bowl games. His best year came in 2016 when he threw 30 touchdowns. His odds are set at 7.50. If you feel like going with an underdog, consider placing a bet on Malik Hooker, who’s entering the draft after just 2 years playing college ball. Hooker’s odds to make US gambling news by being picked first are set at 34.00.

Bet on the first wide receiver to be drafted

The NFL is always looking for young wide receiving talent, and a number of bright prospects are entering the draft this year. If you want to bet on the NFL draft in 2017, consider placing a bet on which wide receiver is picked first.

Mike Williams is the betting favorite to be the first wide receiver picked (photo: bleacherreport.com)

At the top of the odds is Mike Williams. At 6’4, he’s one of the larger men in the position, but is known for his ability to maintain good position. The Chargers and Bills have both expressed interest in signing him, and most online sportsbooks in the US list his odds high at 1.50.

Corey Davis isn’t far behind in the draft betting odds. Baltimore is almost assuredly the team he’ll be signed to, making him one of the top receivers to be picked first with odds of 2.75. The biggest underdog here is Juju Smith Schuster, who earned a total of 24 touchdowns during his college career. Schuster’s odds are set at 34.00.

DeShaun Watson may have the brightest future of any draft entrant this year. The 21 year old quarterback earned numerous awards while playing at Clemson, and was recently compared to Dak Prescott by Skip Bayless.

Watson will almost assuredly be a top pick this year, and members of Intertops that want to bet on the NFL draft can place a wager on his draft position. There are only two options here, both of which are offering a solid chance to make money.

At the moment, the odds are completely even for his draft position. You can bet on whether he’s picked over or under 12th. The odds for both are set at 1.83.

Are you planning to bet on the NFL draft this year? Which player do you think gets picked first? Tell us in the comment section below, and make sure to head to Intertops for a full list of 2017 NFL draft betting odds.