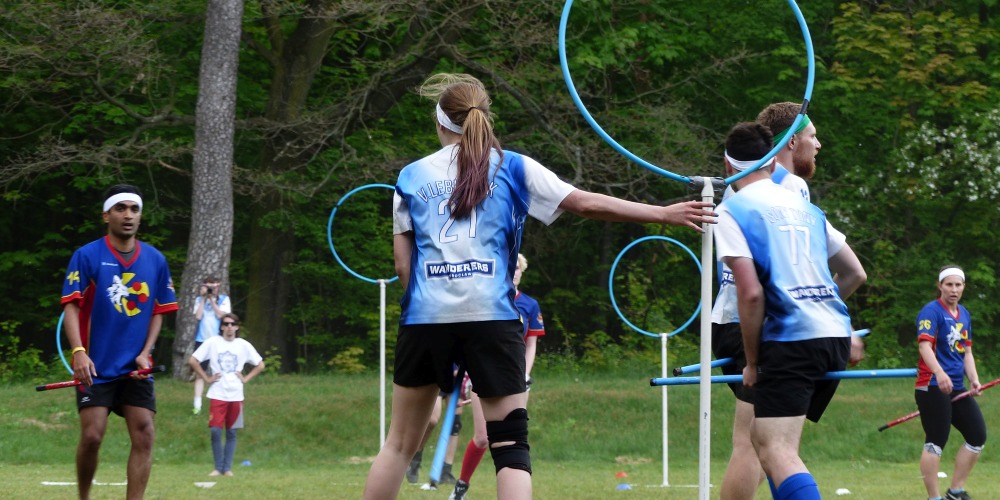 Fans of Harry Potter stories must have played with the idea of ​​what it would be like to watch the most popular sport in the novel, Quidditch. Well, we have great news, it’s already accessible to Muggles too! The Quidditch Premier League appeared in the UK in 2017 with eight teams. For us, Harry Potter may be ‘just’ a book and a fantasy world we like to escape, but these athletes take this unique sport seriously and practice a lot. Have you wondered what a Quidditch match looks like without flying brooms and balls that can move on their own, but with the enthusiasm and creativity of the Muggles? Check out our Quidditch betting guide and see whether it’s as magical as you imagine!

More than 500 million copies of Harry Potter have been sold worldwide. That’s crazy, but let’s be honest, it is understandable! J.K. Rowling made the best decision when she quit her job and started writing. Not only did she create a literary and cinematic masterpiece, but she also created a sport. The Harry Potter series, alongside Star Wars and Lord of the Rings, is perhaps the most successful fantasy story ever. How can we say that? The world of Harry Potter has never stopped expanding since the book’s release. Additional books, lots of fanfictions, countless products, board – and video games, and, of course, one of the most successful film sagas, came from the original seven books.

However, Harry Potter has also managed to bring a new sport into existence, so much so that, not for the first time, a world championship will be held. The International Quidditch Association will organize the next World Cup in Richmond in 2023. Don’t hesitate to bet on your favorite teams at 22BET Sportsbook. You can check out the teams at online sportsbooks in the US, and our Quidditch betting guide will help you through the betting process! The sport, which has existed since 2005, and has been practiced at a professional level since 2010, is popular mainly in the USA, Mexico, and Canada. However, many athletes play it in England, Belgium, and Australia. Alexander Manshel, an American Harry Potter fan, brought Quidditch to life in 2005 when he organized the first competition at his school.

In Quidditch, there are seven players on the field at once: one Seeker, one Keeper, three Chasers, and two Beaters. The athletes have broomsticks instead of brooms since they wouldn’t be able to move around each other with that. Plus, they would be covered with black and blue bruises. There is also a gender-related rule that doesn’t allow more than four players of the same gender on the field per team.

The Chasers and the Seekers pass the quaffle, a volleyball, to each other, in hopes of scoring. Though the opponent team’s players can intercept and even tackle the other team members to the ground to defend their hoops. Throwing the quaffle through a ring is worth ten points. The Beaters’ job is to hit the opponents’ Chasers with bludgers, and soft rubber balls. When that happens, the player hit by a bludger needs to run to their hoops and touch it before they can rejoin the team.

The funniest solution in reconstructing the game is finding the Golden Snitch, a tennis ball. In the books, this small golden ball has wings and flies on its own. That’s not so easy to recreate, maybe soon they will develop drones for this purpose, but they managed to work out a suitable rule for that. The Seekers have to run after the Snitch Runner, dressed in yellow, and catch the ball, fastened to the back of their hips. However, the Snitch Runner doesn’t give up the Snitch easily. They will give their everything to evade and shake off the Seekers. Plus, the two Seekers will also try to prevent each other from catching the symbolic yellow ball. If one of them can get the Snitch, the match is over, and the team gets an additional 30 points, so they join the game in the 18th minute.

The object of the game is essentially to get the ball through one of the opponent’s three-goal rings. However, the Keepers guard them. During the match, everyone takes a broomstick between their thighs and runs with it. Sadly, no one has learned to fly yet.

The rules are almost the same as in the imaginary version. Players aren’t bothered by the slightest to run around with a broomstick. The International Quidditch Association (IQA), manages the official events, and several schools and pro teams represent themselves on an international level. Each team has seven players on the field. The Seekers chase the Snitch, the Chasers score, the Beaters interrupt and distract their opponents, and the Keepers guard the hoops. Check out Quidditch matches at online sportsbooks in the US for a more colorful guide!

Quidditch is a hybrid sport. It has American football, dodgeball, and handball elements with some magical features. If you want to place winning Quidditch bets, you should study these three sports and their betting guides. The odds at 22BET Sportsbook will help too. The most important thing is to check out the teams’ statistics and results. Following the teams’ official accounts and the players’ social media accounts might work in your favor. You can have inside information about their mood, injuries, and mental and physical state. For instance, if the travel to the Quidditch events takes a toll on the visiting teams, they most likely will lose. Here is a little help with the most important sports betting terms! Watch matches and check out the movements and your chosen team’s strengths and weaknesses. Compare them to their opponents, and you will have a clear picture of their chances. Don’t let your emotions get in the way of your judgment, but above all, enjoy the game!