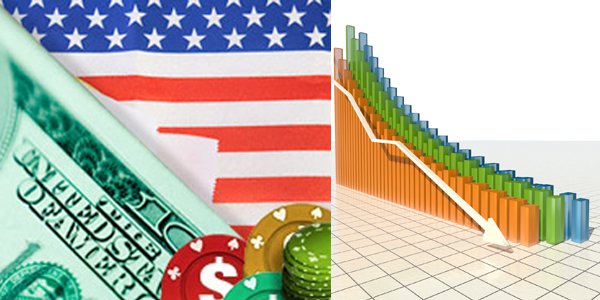 After the US gambling laws changed to allow certain states to bring in online gambling, many expected the money to start rolling in, and New Jersey was no exception to the rule.

However, after the launch of online gambling sites in the US of New Jersey, business hasn’t been doing as well as analysts had predicted.

In fact, as of April, the monthly revenue had already shown a drastic decline, even though the online casinos were launched less than a year ago. The drop spells bad news for the 11 casinos involved, whose revenue dropped 44% since peaking in 2006.

Since the state is dependent on Atlantic City not only for jobs, but for New Jersey’s taxes, the financial consequences could spread beyond the casino.

Less taxes means that state governor has less funds to close the budget. His initial prediction for the casino revenue would amount to $180 million from the 15% online gaming tax rate. Right now that figure sits at $12 million, more than 10 times less.

Part of the problem comes from the banks, who decline to let their customers use their credit cards for online gaming and the software employed, which reject players unless they are within the state.

Any revenue loss or decline spells bad news for Christie, since he plans to run for the presidential nomination in 2016.