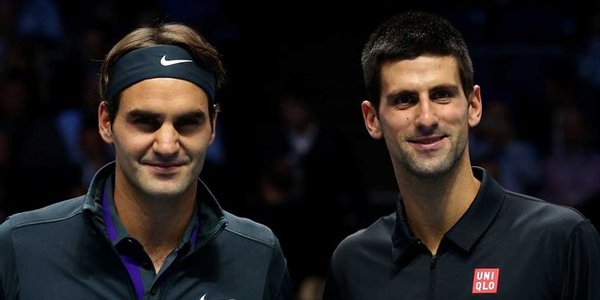 Roger Federer and Novak Djokovic are expected to fight hard for the year-end number 1 spot at the ATP World Tour Final.

All eight participants of the much-anticipated ATP World Tour Finals are known. It’s now time to prepare smart wagers under British gambling laws, and enjoy the action. The tournament kicks off this Sunday, November 9th at the O2 in London.

Top 8 places on the ATP Race are coming, with Marin Cilic, ranked 9th, taking the place of Rafael Nadal, who decided to withdraw from the tournament in order to have a surgery. There’s $6 million prize pool to be contested, besides the honors, but the bigger game is the battle between Novak Djokovic and Roger Federer to end the year at number 1 spot.

A bit of history

The event dates back to 1970, but it has been named ATP World Tour Finals only in 2009 with a move of the location to the O2. The arena is expected to host the event until 2015 unless organizers will further extend the contract.

Roger Federer is of course leading the ranks with whopping 6 wins, Ivan Lendl and Pete Sampras each have 5, but Novak Djokovic is quickly climbing through the ranks and currently has 3 including the last two years’ successes. Online sportsbooks in the United Kingdom favor Djokovic to win the event and remain world number 1.

Group A consists of Novak Djokovic, current world number 1; Tomas Berdych, who managed to qualify for 5th straight time, Marin Cilic, the lucky substitute replacing Rafa Nadal; and Stanislas Wawrinka, who went all the way to the semi-finals during his debut participation last year.

Group B is equally strong: Roger Federer, 6-time winner and hungry to take the year-end crown away from Djokovic; Kei Nishikori, first ever Asian men to qualify; Andy Murray, the crowd’s favorite and 3-times semi-finalist; and Milos Raonic, world number 8 and first Canadian to qualify.

The home boy, Andy Murray will certainly be looking to reach the semis again and try and go further. He’s trying to boost his ranking points ahead of next year’s Australian Open. There’s 200 points to be picked up for a round robin win, 400 for a win in the semis, and 500 for winning the final. Murray is currently 6th, 420 points behind Stanislas Wawrinka, putting in a good performance in London could easily propel him into 4th spot ahead of new season.

The most important points race, however, is the year-end number one spot battle. There’s 1500 points to be won in London for undefeated champion, so Roger Federer can make up the 1310 point difference he currently has. However, should Djokovic win three times at the O2, the title is his, and those who bet on sports in the UK tend to back Novak to do so.

Djokovic is given 1.50 odds by Bet365 to top Group A, while Wawrinka, Cilic, and Berdych are given approximately the same odds of 9.00 to beat the Serbian player to the group supremacy. Group B is definitely tougher: Federer got 2.40 to win it, while Murray has 3.80 odds, Nishikori and Raonic are both valued at 6.50.

Novak holds a 42-5 combined record against his group opponents, and while Cilic has 0-10 to show against the Serbian pro, his match with Berdych will most probably decide if Marian gets to qualify. Cilic has already beaten Berdych twice this year at majors. Wawrinka is in really poor form coming to the tournament, so we can forget about him for a moment.

Cilic got a line of 2.50 to qualify for the semis, which is quite nice, considering the above-said. But he’s still struggling with an arm injury which made him withdraw from Bercy and Valencia. The Croat starts against Djokovic and will have yet another chance to improve his statistics.

Murray’s odds of 1.66 to qualify look too short at this point. After all he’s got a 9-7 record in this tournament and a very poor 2-8 against top-5 opponents during 2014. Raonic is most probably out of the picture, just remember his flop in Bercy only last weekend.

Nishikori’s the man to watch besides Federer obviously. The Japanese player is given 2.80 odds to qualify and at this point it seems to be a pretty smart bet. Nishikori had steady form throughout the year, he won 5 out of his six last matches against top-10 players, and he only lost to Djokovic last week because of a small injury.

Having said all that, the semi-finals could very well repeat this season’s US Open. Cilic facing Federer and Djokovic receiving Nishikori as his opponent. As for the outright winner odds Djokovic is leading the way with a short line of 1.90, followed by Federer at 3.75, Murray at 6.50 and Nishikori at 15.00.

The Federer v Djokovic face-off is quite likely on November 16th, and remember that Roger is not only going for his 7th title, but also for the 1500 points for the undefeated champion.