Sachin Tendulkar: The Greatest Cricketer in the Sport 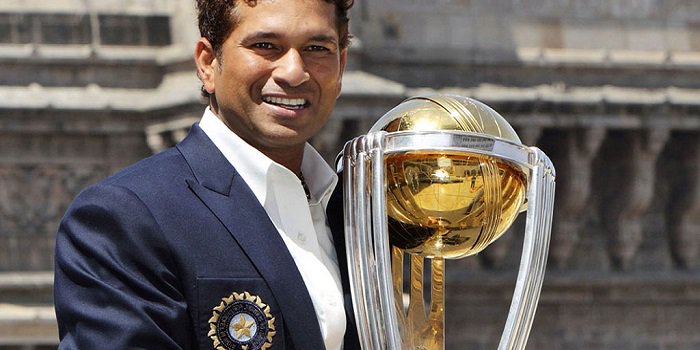 The story of the only player to earn over 30,000 runs in International Cricket.

• As a boy, Tendulkar loved tennis and revered John McEnroe
• Tendulkar was youngest Indian to score a century in debut
• Tendulkar finally made his 100th International century in 2011

Before he ever made Indian gambling news by achieving a World Cup win and making five other World Cup appearances, Tendulkar was ranked by the Wisden Cricketers’ Almanac as the second greatest Test batsman and One Day International batsman of all time. Tendulkar, who officially retired from all forms of cricket by 2013, has won numerous awards including Arjuna Award, Padma Shir, Padma Vibhushan, Sir Garfield Sobers Trophy and Bharat Ratna.

As a child he was mad about tennis, but showed promise in cricket too – obviously

Born in 1973, Tendulkar’s father was a Marthi novelist while his mother worked for an insurance agency. Spending his formative years in a cooperative housing society in Bandra, Tendulkar loved tennis and revered John McEnroe. Tendulkar’s half-brother Ajit introduced him to cricket in order to distract him from his practice of bullying other children. Ajit also introduced Tendulkar to Ramakant Achrekar, the famous cricket coach who operated a school.

After observing tendulkar’s skill while hiding from him, Achrekar admitted the youngster into his academy. With Achrekar’s guidance, Tendulkar attended Sharadashram Vidyamandir High School which was known for their strong cricket team. Practicing with Achrekar in the mornings and evenings, Tendulkar spent hours in the nets challenging other bowlers by offering a one-rupee coin to whoever could dismiss or strike him. If Tendulkar remained strikeless, Achrekar would give him the coin.

Soon considered a prodigy, Tendulkar was predicted among cricketing circles to be one of the greats. While playing for his high school, Tendulkar also played for the club team John Bright Cricket Club in the Kanga League. While playing for the Cricket Club of India, he attempted to train as a fast bowler, but was discouraged by world-renown Australian bowler Dennis Lillee and persuaded to pursue batting instead.

At 15, Tendulkar represented Mumbai at the Ranji Trophy domestic First-class cricket tournament as a substitute fielder. A year later he played for Mumbai against Gujarat and made gambling news as the youngest Indian to score a century in a First-class cricket debut. Tendulkar would also score centuries in his debuts in Deodhar and Duleep Trophie tournaments.

At the end of the 1988-1989 season, Tendulkar was Mumbai’s highest run scorer. As the sixth highest overall scorer and achieving an unbeaten century at the Irani Club in Dehli, Tedulkar toured England with the Star Cricket Club for two years. While playing an Australian team in 1998, Tendulkar won his first double century. At 19, Tendulkar played for Yorkshire becoming the first foreign born player to join the team.

Making his Test debut against Pakistan in Karachi and was hit numerous times to his body by the Pakistani bowlers. Tendulkar would soon make history again by being the youngest player to debut for India in a One Day International tournament. Once again Tendulkar achieved “youngest ever status” when scored a Test century in Manchester while touring England.

In the 1991-1992 tour of Australia, Tendulkar had two centuries in Sydney and Perth. After being assigned opening batter, Tendulkar scored his first One Day International century against Australia. In 1996 Tendulkar was only Indian batsman to perform the semi-final against Sri Lanka. Unfortunately the match referee gave the match win to Sri Lanka after Tendulkar fell while batting and the crowd rioted.

During the Australian tour of India in 1998, Tendulkar was pitted against Shane Warne, the greatest spinner at the time. In a three-day test match, Tendulkar made Australian gambling news by scoring a double century and Warne conceded 111 runs in 16 overs resulting in Australia’s loss. In a two-test series in 2010 in South Africa, Tendulkar became the fourth Indian to score four consecutive centuries in Test play.